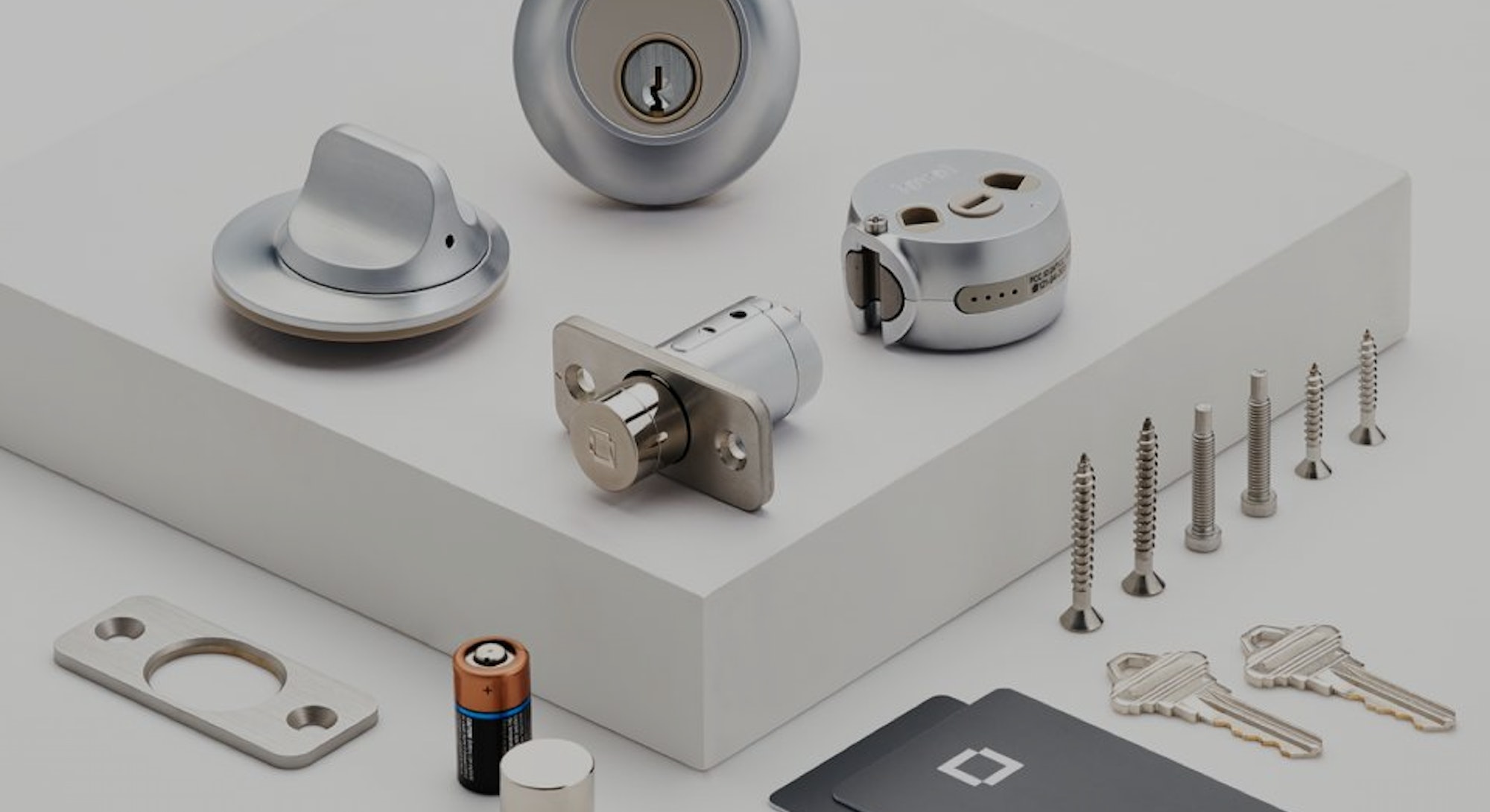 At first glance, Level's wares look like the dumb locks they replace, and that's a good thing. First, it means it's less likely someone (like, say, a would-be burglar) will recognize a Level lock as a smart one, and take their chances with it. Second, it means installation is really easy and doesn't require any additional drilling of holes or other moves that are not only tedious but often impractical if you rent rather than own.

Level's good-looking locks and clever design have been hallmarks since its very first device, the Bolt, which as the name suggests simply replaces the innards of your existing lock, smartening up the deadbolt you already have. Its latest tries to go a step further by adding a new feature: touch... along with a few other conveniences like access cards.

Now, it's not the sort of touch you (and we) were expecting when we first heard about it. Instead of a biometric fingerprint sensor, the Level Touch uses capacitive touch to allow you to lock or unlock a door by simply touching the lock's exterior, and uses geo-fencing to decide when that works... with mixed results. But more on that later. First, though, let's talk installation.

Officially, all you need to install the Level Touch is a screwdriver. You start by removing the old lock, and the plates in the door and doorjamb that the deadlock passes through. In addition to the screwdriver, I needed a small hex key to get the rear panel of my existing lock off, but that's not Level's fault. The included instructions were easy to follow, and there are two different caps for the deadbolt that houses the CR2 battery to ensure the best fit even if your lock is a little further (or nearer) the edge of the door than is standard. Level says the battery should be good for about a year, and the app lets you know when it needs replacing with plenty of warning.

The whole process took 10-15 minutes, and thereafter setup was relatively simple, too. I downloaded the Level app (available for Android and iOS), named the lock, and replaced the default wallpaper with a picture of my own abode. I checked the deadbolt was locking and unlocking as expected, turned off the optional sound that's emitted by default when it locks or unlocks, adjusted settings like the delay before auto-locking, added the pair of included hotel-style access cards, and shared access with my wife.

First, there's the auto-lock feature which simply turns the deadbolt after an allotted interval between 30 seconds and an hour. Because there's no sensor to check whether or not the door in question is closed, the door will lock even if it's open — like, say, if you've got it propped open while you bring in shopping — or if someone's left it open. I had to turn it off as a result.

The same problem extends to the touch to lock feature. If, for instance, you're trying to get out the door with your hands full and your elbow (or any other bit of you) brushes the lock's exterior, it engages the mechanism. More than once in the first week of using the Level Touch I found myself with the bolt protruding from the door despite it being open, with my hands too full to reach behind the door, unlock it, and then close it again.

In ideal circumstances, users should be able to walk out the door, touch the Level to lock it, go about their day, and then touch again to unlock when they (and their phone with the Level app) returns within range. But nothing about 2020 has been ideal, and least of all the circumstances. So, because Level uses geofencing to decide when you're in or out of range and the lock should accept or ignore touches, if you're merely going to your building's lobby to get a parcel, you can find yourself unable to unlock with touch alone unless you walk around the block to reset the geofence triggers.

I expected the "touch" part of the Level Touch to be more useful and less nerve-wracking.

Also, if you leave your phone and keys inside, close the door, and accidentally touch the lock you could find yourself locked out. Which makes sense. You don't want touch-to-unlock to always be enabled, otherwise what's the point of the lock? And, don't get me wrong, you can always use an on-screen button in the Level app to control the lock, plus there are always the actual keys or access cards that come with it. It's just that, well, I expected the "touch" part of the Level Touch to be more useful and less nerve-wracking.

Where the Level Touch really shines is with multiple users who are, you know, actually leaving the house. The app lets you share access digitally with multiple users, either by granting permanent access (to, for instance, partners, children, staff, or the like), or by sharing a temporary pass where you can customize the duration (and which can be revoked).

Any time anyone interacts with the lock, the activity is saved and you can view this history in the app. This includes manual interactions using a key or the physical knob on the rear, you or other residents using the app, any temporary pass holders, and anyone using either of the supplied access cards (which can be individually named). You can also set up notifications for these.

That level of oversight is great if you're worried about children getting home from school, for instance... or you have a cleaner who comes once a week... or someone loses their key... or you're running an Airbnb. It's not great for the privacy of your family members, I suppose, but if children want privacy they should get jobs and move into their own places, right? Right.

Where the Level Touch really falls short is when it comes to interoperability. Inexplicably, Level only offers full smart home integration for Apple's HomeKit platform. While Apple's smart home platform may be about to become more popular thanks to the excellent HomePod mini, many Apple loyalists are already heavily invested in Amazon's Alexa devices, or the Nest range of smart speakers and displays powered by Google Assistant.

Though there's plenty of Apple hardware in my apartment, I rely on Google for smarts. That means the Level Touch is invisible to it. I can't use Routines, which manage my lighting, plugs, and heating, to auto-check that the door is locked. I can't ask Google to lock or unlock it when my hands are full and I've accidentally triggered the bolt. And I can't see the lock's status on my Nest Hub's display or in the Google Home app.

To be honest, though, it doesn't really matter. If this was a smart bulb, smart plug, or smart appliance it would be a dealbreaker, but for a lock it's, well, somewhat less of one. Though I'd like to be able to control the Level Touch with my voice I don't really need to be able to. I can use the app if I've forgotten my keys, and I can share access with other people regardless of whether they use Android or iOS.

Level's activity history.Craig Wilsion / Input
The settings menu is limited, but covered the essentials.
Don't expect to rely on touch alone if you're not going far or you might get locked out.

Should you get one?

The Level Touch looks great, won't attract unwanted attention, is easy to install, and is a solid option if you're expecting lots of traffic through a particular door, want to be able to unlock a door from your phone wherever you are in the world, or want to be able to share access with ease. But we've got two reservations about recommending it. First, there's the aforementioned interoperability problem. Unless you're willing to either sacrifice functionality or forsake all smart home platforms but Apple's as long as you both shall live, you may want to look elsewhere.

A second — and arguably even bigger problem — is the price. At $329, the Level Touch is as expensive as it is plush. Thanks to its stainless steel trimmings and brilliantly engineered mechanism, it has all of the style of an Apple product... but also the trappings of the premium price point. Invest in three Level Touch locks and you're suddenly looking at $1,000. And still none of them will work with Alexa or Google. Yikes.

If you ask me — which, by reading this far, you effectively have — locks aren't the sort of things that benefit from technologically walled gardens. I love the Level Touch's finish and build quality, the ability to share and control access, the access cards, and the simple and intuitive app... I just wish it worked with the smart home platform I already speak to all the time and into which I've already poured so much time creating schedules. At this price point, I really don't think that's too much to ask.