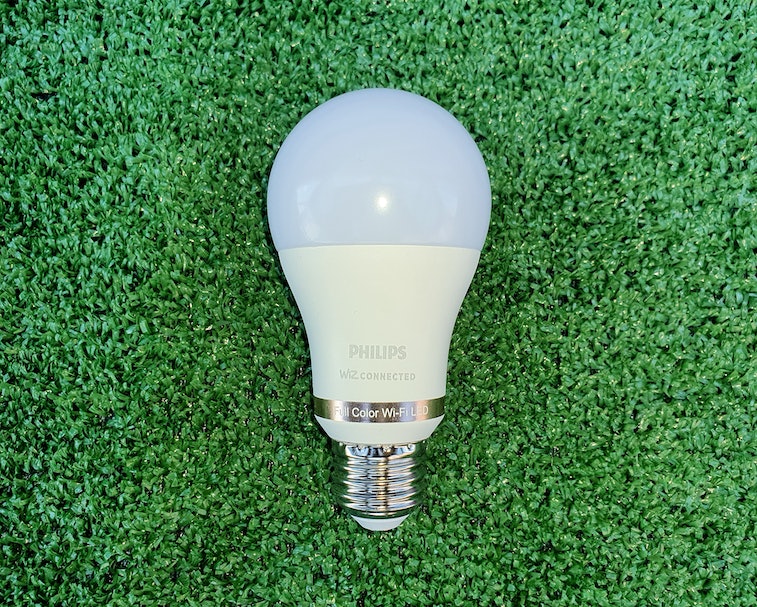 Philips Hue smart lightbulbs first went on sale in 2012. Despite being one of the first to market they also managed to be the best, and continue to set the bar for functionality, quality, and reliability. But traditionally there's been one major problem with the Hue range: the price. Not only are the bulbs, standalone lights, LED strips, and other Hue hardware devices costly, but they also require Philip's $60 Hue Bridge (or an equivalent, Zigbee-enabled bridge) to operate, making it easy to spend hundreds of dollars while only smartening up the lights of a single room.

Philips acquiring smart home company Wiz last year April has changed all of that. Now, for not much more than the price of a regular bulb you can buy one with Philips' quality and Wiz's smarts that allow it to connect directly to your Wi-Fi network (via 2.4 GHz only) and integrate with Google Assistant, Amazon Alexa, or Apple's Siri. The result is less faffing with settings, and more time enjoying the numerous benefits of affordable smart lighting.

Fits any A19 screw socket, offers millions of colors, and can be controlled with the WiZ app, or via Amazon Alexa, Google Assistant, and Siri Shortcuts.

Familiar form — The Philips Wiz Connected comes in the familiar A19 form factor covered here — namely, a screw-in bulb that fits most lamps — as well as in the larger BR30 format, and even as downlights (with the E26 fitting). You can probably find one for all but the most unusual lights in your house, and if you're only looking to do one or two rooms, it's super affordable. The bulbs can also be bought in bulk from The Home Depot, but weirdly, it's often cheaper to buy them in singles.

In addition to the full-color variant, the A19 bulbs come in three white-only options. There's the cool white "Daylight" and warm white "Soft White" (both $9.97), and one that offers both warm and cold white in a single bulb called "Tunable White" ($11.97). Like the colorful version, all three are 60 W equivalents. But considering the price difference, unless you're certain you won't want color, it's worth springing for.

Why color? — You may think colored bulbs are a surefire way to make your lounge look like an opium den... or just pure kitsch. You're wrong. Sure, you can make the bulbs glow in an Amsterdam-inspired red if you want to, but it's the subtle shades in between the extremes where the most joy lies. Matching the lighting to a focal piece of furniture, your mood, or a party theme is a great option to have, but just as useful is being able to set a slightly cooler or warmer shade of white light when working or relaxing respectively.

The bulbs are also great for sticking in bedside lamps and using to both create a fake sunrise in the morning to help with getting up (winter is, after all, always coming) and to help you wind down at the end of the day. The Wiz app means setting those sorts of recurring lighting shifts is incredibly easy. And, if you use them in actual light fixtures but you're only renting, just swap them for the original bulbs when you move out.

Time is money, but talk is cheap — The Wiz app definitely isn't as slick as the Philips Hue app, but once you've created schedules you won't be spending much time in it anyway. Moreover, if you use either Google or Amazon's voice assistants (or Apple Siri shortcuts) you can further reduce the need for the app. It's a pity there's no full-blown Apple HomeKit support... but for reasons that escape us, we're told we can't have everything.

Wiz also integrates with automation service IFTTT, so you can set geofencing-based rules — like turning bulbs on or off when you arrive or leave home — or novelty ones, like changing specific bulbs to blue when rain is predicted, or getting them to pulse when you Uber is about to arrive.

Power sippers — According to the package, if you use one of the bulbs for three hours a day and your electricity cost is $0.11 per kWh you're looking at an annual cost of $1.06 and a lifetime of 22.8 years. That's LEDs for you. Even if you quadruple that (to 12 hours a day), that's still only $4.24 a year and 5.7 years before you'll need to replace them.

Setup is as simple as screwing in the bulb, turning the light switch or plug on and off three times in quick succession, and following the in-app instructions. Combine that with the killer price, and there's no good reason you shouldn't scratch the smart bulb itch if you've been even slightly tempted to.