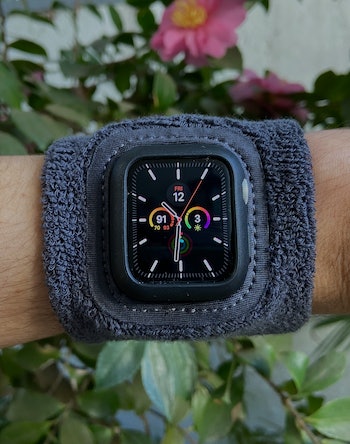 There’s no reason the band of an Apple Watch shouldn’t be more functional.

There are oddball projects like the Wristcam, which add cameras and batteries into the straps of your smartwatch for added photo and video calling capabilities (Apple reportedly considered its own variation on this back in the day), but nothing’s ever been popular enough to break into the mainstream.

Luckily, TwelveSouth’s new $30 ActionBand does add some functionality to an Apple Watch that’s perfect for the fitness-related activities the smartwatch is already best at: You can wipe away sweat with the same wrist your watch is on.

That somewhat plain description is not to do a disservice to the ActionBand. The pair of sweatbands that make up the ActionBand package are very comfortable to wear. For $30, you get one band with a dedicated rubber housing for your smartwatch, cutout for the digital crown included, and a traditional sweatband for your off-hand, for symmetry purposes... or sopping up more sweat.

Like a well-fit Apple Watch band, it’s pretty easy to forget you’re wearing them while you have them on. The lycra blended into the band’s tasteful grayish cotton also offers enough give that you can slide your Apple Watch further up your arm if that’s more comfortable during certain workouts, without breaking skin contact. Not quite the same as the company’s ActionSleeve, which slots an Apple Watch into an armband, but depending on your arm, maybe pretty close.

The accessory company’s framing for the product is interesting. “You have workout shoes, why not a workout band?” On one hand, sure. Given the price of Apple’s bands — starting at $49 for just a rubber Sport Band — there’s good reason to both want to protect your “investment” from the grimy build-up that comes from sweat and skin contact, and consider more affordable options. The ActionBand is both. On the other hand, it’s solving a problem that I’m not sure anyone was really asking to be solved.

Gross but true: The ActionBand works great for wiping away sweat.

What surprised me wearing the ActionBand, was that TwelveSouth’s accessory not really having a pressing reason to exist didn’t bother me all that much. Its color is a little too safe (these are just begging for some fun, ‘80s-inspired colorways), and I wish the cutout for the digital crown offered just a bit more clearance (my smartwatch housing seemed to rub, only slightly), but it did what it was supposed to do. It caught my sweat and was machine-washable when I was done.

Maybe not as exciting as filling a smartwatch band to the gills with technology, but in a field of Apple Watch bands that are either chasing existing timekeeping aesthetics or going all-out making Apple’s wearable something it’s not, at least TwelveSouth is trying something genuinely comfortable.

If you sweat a lot, the TwelveSouth ActionBand is a better band for Apple Watches than Apple's sport band.