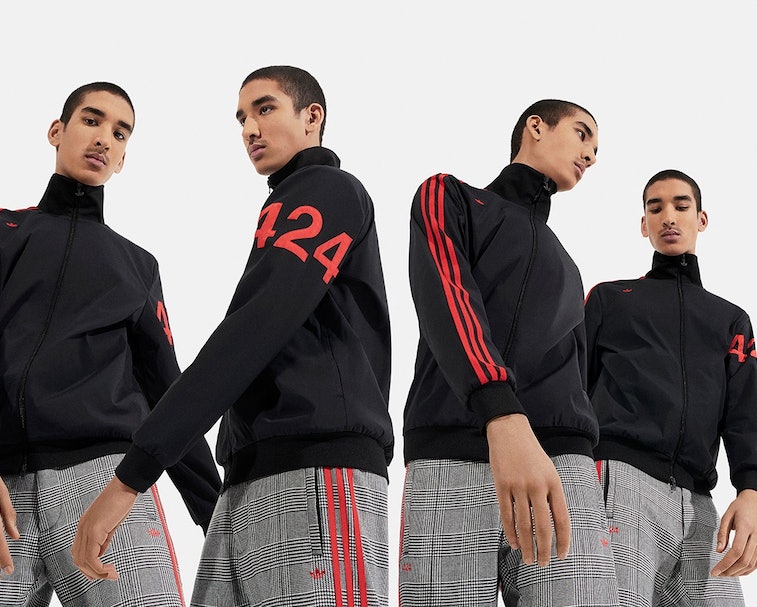 The tracksuit, and track pants especially, have reached their zenith. The athleisure staple is almost a must for any seasonal collection these days, and there has been no shortage of options in the territory: from Needles' luxe pants beloved by rappers to Rick Owens finding a way to make them goth. (Jack Dorsey tried the latter, albeit quite poorly.) But the most exemplary instance of the form and how to wear it has to be Run-DMC in the Adidas tracksuit. With apologies to the Royal Tenenbaums, no one has done it better than the trio of Run, D.M.C., and Jam Master Jay.

Guillermo Andrade's high-end streetwear brand from Los Angeles, 424, must agree as it looked to the seminal rap group for its latest collaboration with Adidas. As tracksuits have become ubiquitous, it's a testament to the Run-DMC influence that a casual sports jacket and pants are what stand out most from the range of sneakers and apparel. That, and Andrade's own alluring spin on the classic design.

A uniform that's less so — The black-and-red tracksuit Run-DMC once wore has been reimagined with kimono-like construction on the jacket and asymmetrical branding on the pants, countering a tiny Adidas trefoil logo with an oversized "424." It's styled without a shirt on the model, which could absolutely be a look for those brave enough to try it. I, however, do not have the courage — but it doesn't make the set any less covetable.

Straying further from Run-DMC is a tartan track pant made less formal by the three stripes running up the leg and tiny logos from both brands. This trouser / track hybrid has been done before, including by Needles, but there's a novelty to seeing the pattern come from Adidas that I just can't resist. Instead of a matching track jacket, 424 maintained the idea of elevation with a knee-length overcoat. The idea also continues with the blazer-esque track jacket, complete with three stripes.

Other offerings include a hoodie and scarf, both oversized, in addition to an asymmetrical striped T-shirt and a black denim hat.

The kicks — For once, the sneakers take a backseat to the clothing in a collaboration with one of the giants of sports apparel. The four pairs include a white, pared-down SC Premiere with a shaggy 424 tongue tag similar to the brand's release with Adidas last year, as well as black and white versions of a Pro Model with a beefed-up midsole. Finally, there's a super clean white-and-cream Superstar with the same red tag as the SC Premiere.

It's because of this minimal nature that the shoes don't scream as loudly as the apparel, but that doesn't mean they're weak either. It's good to have more understated sneakers in your rotation, and 424's fit the bill.

Dropping this week — The collection drops this Friday, April 8, through Adidas' website. Prices haven't been announced, but it's fair to expect the sneakers to be somewhat cheap and the clothing to be somewhat more expensive because of their elevated nature.

With how versatile they'll be, you'll hear no complaints from me.