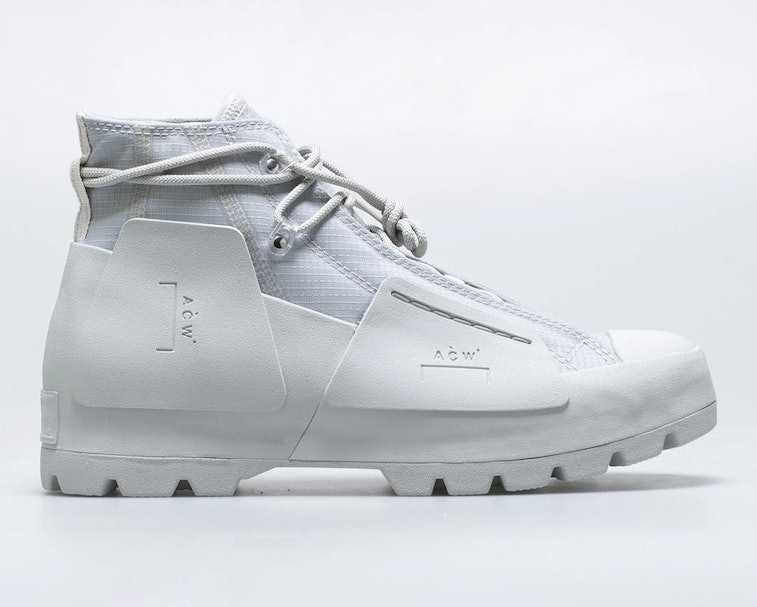 A-Cold-Wall* has collaborated with Nike on several occasions, and now the brand has unveiled its first sneakers made in partnership with Converse. The industrial-informed brand has taken on the classic Chuck Taylor, as well as the ERX-260 — giving both a makeover instantly recognizable as A-Cold-Wall*. The Chuck has been given the most extreme transformation, becoming a highly technical rubberized sneaker that looks more like a boot than the OG basketball shoe.

In place of the typical canvas upper for the Chuck Taylor is a more durable ripstop material, but the most prominent changes come in the form of rubber paneling. Two large panels on each side of the shoe sit atop both the upper and a widen-midsole. Together with the lugged midsole, this Chuck has more in common with weatherized boots than it does anything else. The lacing system also extends to the back of the heel, giving it a more secure fit and a more rugged appearance.

Unpacking the ERX-260 — The ERX-260, meanwhile, is more of a lifestyle shoe than something equipped for the elements. Flourishes that make its '80s origins readily apparent have been toned down on the upper, which is rendered in suede and a smooth-finish leather. A new lacing system is also pared down, while the entire sole is made from an icy blue transparent rubber. As with the Chuck Taylor, A-Cold-Wall*'s branding is embossed into the upper.

Much like its Nike collaborations, A-Cold-Wall* keeps things monochromatic with the Chuck Taylor coming in all-white and the ERX-260 getting several shades of grey.

Get your kicks in September — Both sneakers will release through Shop Nice Kicks on September 1. Pricing has yet to be announced, but given the upgrades, we can expect a price increase to match when compared to their base models. That's the price to pay when things get more technical, but we can't say it isn't worth it.