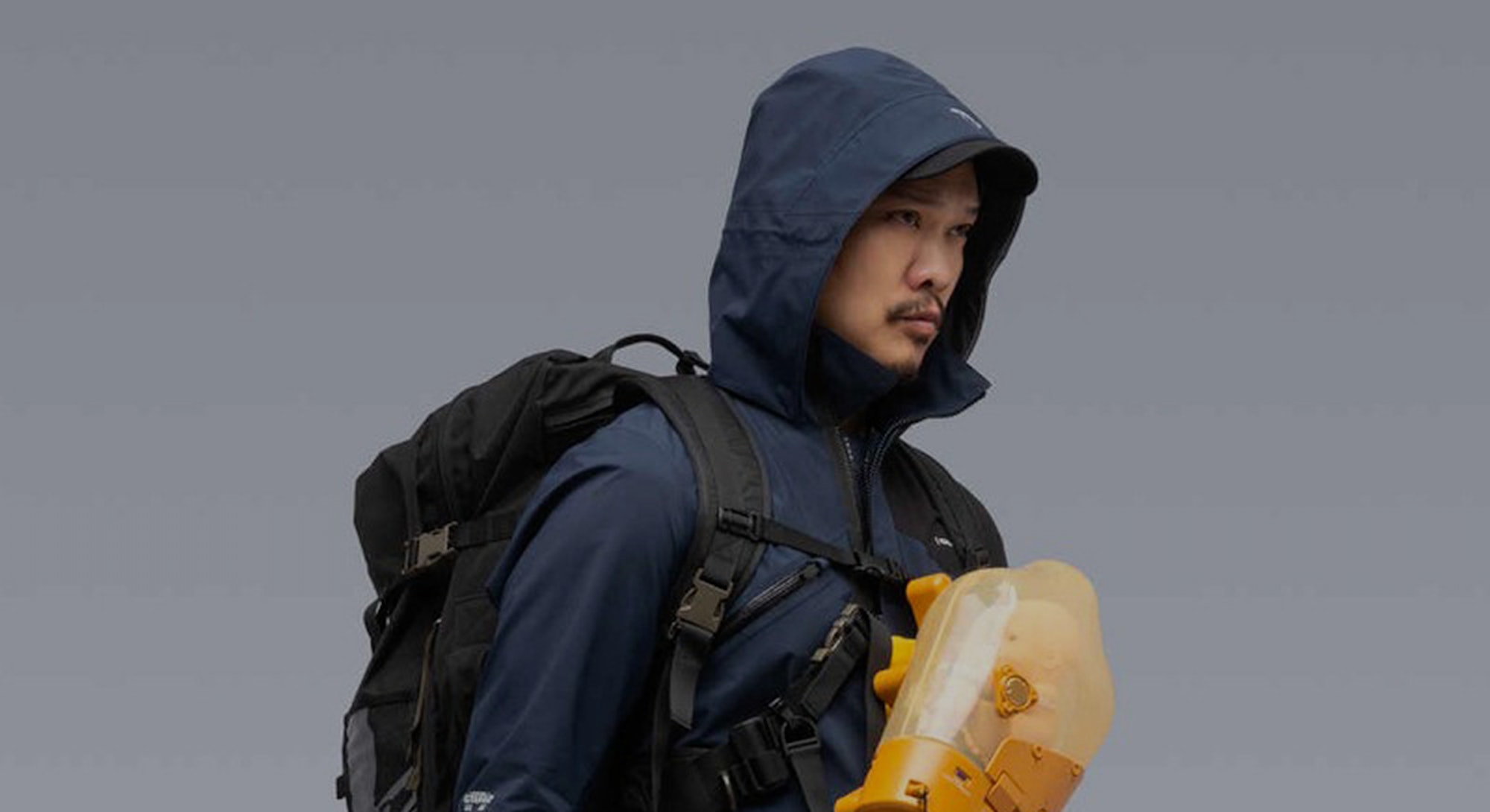 Since the moment they brought Acronym to life in 1994, Errolson Hugh and Michaela Sachenbacher vowed to elevate design and functionality without compromising the product.

That exploratory ethos, along with its mission to redefine what it means to be fashion or tech, is what has led to Acronym’s cult following after becoming a clothing label in 2002 — and what's been the energy behind numerous collaborations, including with industry giants like Nike. But, for all of the brand's success in fashion, for Hugh and Sachenbacher it has always been about taking Acronym outside its comfort zone, and there's no better example of that than its latest experiment: an unlikely partnership with Asus on a gaming laptop that combines style with state-of-the-art hardware.

This unexpected collaboration features branded packaging, recyclable concepts, and a holographic display of Hugh on the laptop’s case. But Errolson’s design process didn’t change for this project; it was always about shifting and confronting expectations, just as much as it is to satisfy them. For consumers, that translates into a $2,500 Asus ROG laptop that’s basically a futuristic, cyberpunk dream machine.

Since its inception, Acronym has been blending tech into its collections, both literally and spiritually, but the company is no longer alone: We’ve seen hints of these spaces coming together in different ways, from retailers leaning on artificial intelligence to enhance the shopping experience, to brands that have started to embrace wearable technology, like a Google-powered Levi's trucker jacket.

“There was never an idea that was too crazy.”

As the fashion and technology industries collide, though, there are negative side effects — particularly on the environment, an area that Hugh and Acronym are focused on bringing solutions to. The company’s mentality has been to create more durable and functional products, which, while expensive, are going to last you decades and not contribute to the wastefulness of the fast-fashion industry. Hugh’s focus on designing sustainable pieces is key to everything he does, whether it’s a pair of $1,000 cargo pants or a $2,500 laptop.

Just over 26 years ago, Hugh and Sachenbacher founded Acronym as an independent design agency. At the time, their main purpose was to do consulting work with a wide range of brands on the idea that “form follows function” — where the shape of an object should relate to its intended utility. Acronym’s goal quickly became to turn that idea into wearables that married style and technology to create every-day functional gear. And with little to no marketing, it eventually became one of the hottest brands in fashion, due in large part to Hugh’s futuristic (and at times bizarre) vision of what people should be wearing… or using in general.

In 2002, Acronym worked with Burton Snowboards on an Analog MD Clone Jacket, which was named one of TIME Magazine's coolest inventions of the year. The jacket featured a Walkman Player with Softswitch technology, which enabled textiles to function as interfaces to control any electronic device type. The soft, flexible control pad allowed snowboarders to avoid removing their gloves and unzipping their jackets to change the song or control the volume. It was an unusual product, to say the least, but it spoke to everything Acronym is about.

"Burton was great because they were so irreverent," Hugh told Aphrodite in an interview in 2018. "Snowboarding's inherently technical. You need the protection, you need the performance for the activity, but it's got such a punk rock spirit. There was never an idea that was too crazy." It was important for Hugh to set the brand up with a design language that matched the Acronym aesthetic, one that’s intended to transcend time and push the boundaries of any and all design elements.

From that day forward, Acronym has collaborated with a myriad of world-renowned brands, such as Arc'Teryx, iDiom, Analog USA, Gore-Tex, Bagjack, Massimo Osti, Herno Laminar, Stone Island, United Arrows Japan, and Nike. These collaborations have placed Hugh and his brand at the forefront of technical apparel, paving the way for other streetwear brands to experiment with their designs and overall practicality of their clothes.

Creating products that appear as if they were transported from another time, or sometimes even reality, can be a risky move. But, ultimately, that’s what has set Acronym and its collaborations apart from other brands in the space — no matter how complex a product or material may seem, Hugh tends to find a way to make it relevant to people, be it streetwear aficionados or gamers.

His repertoire, expertise, and obsession with dystopian futures led Hugh to the world of video games in 2015. Eidos, a Canadian video game development studio behind the game Deus Ex, tapped him to design the coat of the lead character's outfit — a functional, military-style design. Then, Acronym went on to create a custom Robocar with Roborace, the world's first driverless vehicle competition, and most recently, a real-life replica of Norman Reedus’ jacket worn in Hideo Kojima's Death Stranding video game.

“Our focus was on using the design decisions available ... to expand [Asus'] idea of what a ‘gaming’ laptop could be.”

But Hugh's affinity with the virtual world doesn’t end there, and his partnership with Asus is a sign of how he views Acronym in a light that isn’t exclusive to fashion. "We didn't want to take our cues from how a powerful creative laptop, or a powerful gaming laptop, is constructed, finished, or presented," Hugh told Input. "Our focus was on using the design decisions available, from the colors and graphics of the laptop exterior to the way the user experienced the keyboard to expand [Asus'] idea of what a ‘gaming’ laptop could be and what it might be used for."

During the design process, Hugh and his team realized they would need to branch out of existing approaches when finding the right colors for the keyboard and the surfaces' layouts. "We've been working in apparel for a long time and have reached a level of expertise within this area," Hugh says. "For this collaboration, we were excited to challenge ourselves, test our design process, and push into other areas. Since computers are the primary tool of creative people and increasingly dominate our lives, the objective was to see if we could create a unique experience for users that encourages them to be more thoughtful about the tool they're using."

To some, a streetwear brand collaborating with a gaming laptop company might seem out of the ordinary, but a partnership of this kind could potentially open doors for other fashion brands that want to work with tech companies in the future — and we know there’s interest from both sides there. "We see Acronym as part of a system for living, and these days, a person's life takes place as much in their digital environment as their physical environment. Therefore, collaborating on a hardware platform felt like a natural extension of the Acronym design philosophy," says Hugh.

Operating at the intersection of design and technology makes Acronym effective because it seamlessly bridges those gaps. Acronym isn’t interested in competing with the H&Ms of the world— it doesn't care to be a fast-fashion brand, and it has figured out that its unique approach to all elements of design is what makes it stand out in what's quickly becoming a crowded streetwear space. Acronym is Acronym because Hugh wanted it to be different, and he’s here to play the long-game and ensure that never changes.

This article was originally published on Oct. 1, 2020