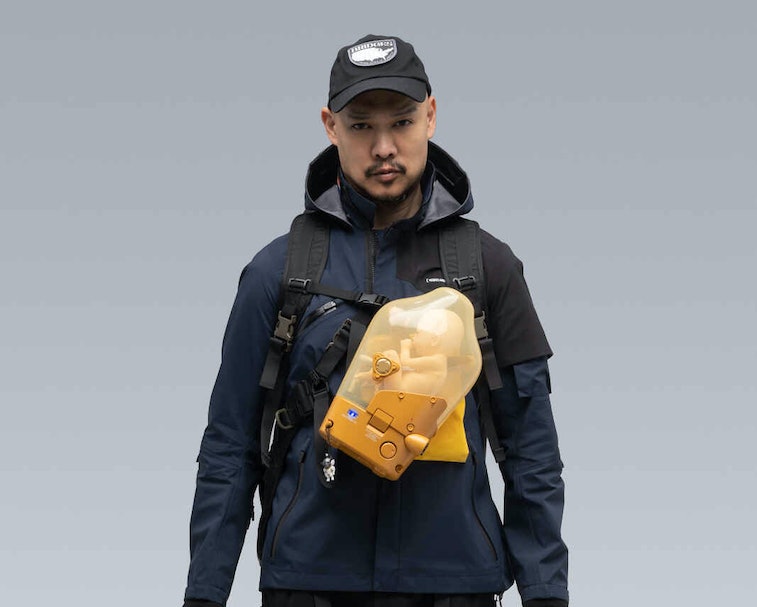 The last time we posted about Acronym, we mentioned how Death Stranding took inspiration from and even included Errolson Hugh and his designs in the game. The Munich-based brand makes the most drool-worthy technical apparel in the world, making it a natural choice to outfit a dystopian courier ready for battle. Now, for the first time, Acronym has recreated the jacket worn by Norman Reedus' character in the game — and it can be yours for a paltry $1,785.

Garment goes IRL — Acronym teamed up with Hideo Kojima and Kojima Productions to bring the jacket to life as a variant of the brand's J1A-GT Gen 2.2 — which is itself an updated version of Acronym's first jacket. While the brand only created one piece for Death Stranding, Sam Porter's base layer, character designer Yoji Shinkawa took inspiration from Acronym's highly functional apparel for the garments inside the game.

In real life, the jacket features a convertible storm collar and removable storm hood, as well as Acronym's magical Gravity Pocket, which sits inside the sleeve and can drop a phone directly into the wearer's hand. One of the coolest details is a magnetic strip on the collar that can be used to hold wireless ear buds. Made of Gore-Tex, it's lightweight and waterproof and features a dual-zipper for increased breathability.

The most obvious cue from the game is the bright yellow flak pocket, which resembles the Bridge Baby carrier. Bridges branding appears all over the jacket in tiny text that also outlines the various features — both real ("Caution: Do Not Overload Gravity Pocket") and fictional ("Timefall-Proof Technology"). Both the Acronym and Bridges logo appear on the jacket's rear, equally small.

Prepare for an investment — $1,785 is an awful lot of money for a rain jacket, but Acronym's next-level designs are worth every penny. The brand's pieces routinely sell out and maintain most of the value when resold and used. In fact, this Death Stranding piece has already sold out on Acronym's website. The good news is that it's still available through Kojima Productions' online store.

Wearing clothing from Acronym is already a treat that continues to give as you discover its many uses. Now, that feeling that you're living inside a video game will be even more real thanks to Death Stranding. Let's just hope our real world doesn't become equally dystopian.

More like this
Maya Ernest
5.16.2022 7:00 PM
Style
Supreme is dropping Malcolm X gear as a fundraiser for a Black research library
Andrea Carrillo
5.25.2022 3:03 PM
Style
Yeezy Gap Engineered by Balenciaga's second collection will drop this Friday
Andrea Carrillo
5.23.2022 5:13 PM
Style
Adidas and Balenciaga’s collab will give you a run for your money