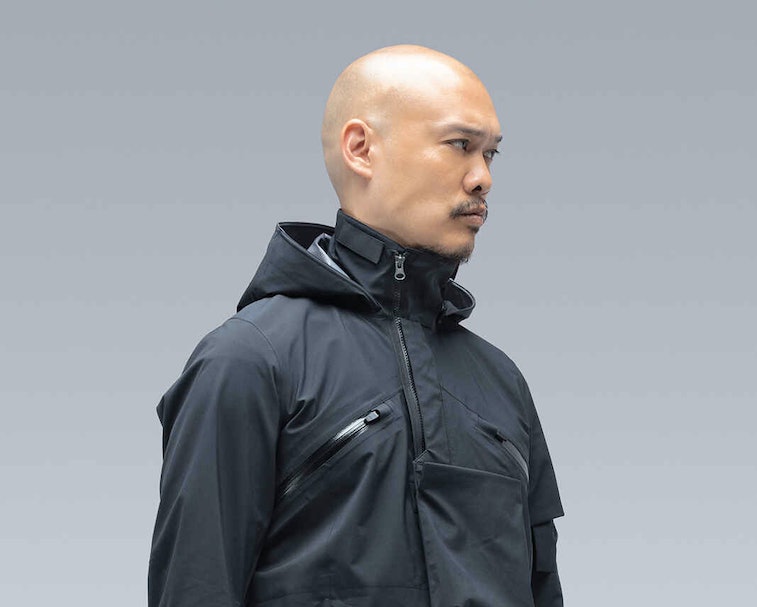 Even if you don't know it, there's a good chance you're familiar with Errolson Hugh. The Acronym designer — who's very much the embodiment of his urban mercenary technical apparel — appeared in Death Stranding as Alex Weatherstone and designed the base layer Norman Reedus' character wears in the game. In fact, much of the game's wardrobe was inspired by Acronym, further cementing the feeling that you've been dropped into an action sequence while wearing the gear.

For those addicted to that feeling, or those ready to enjoy it for the first time, Acronym is dropping five pieces from its SS20 collection, including two waterproof jackets that are to die for. Both come with "gravity pockets" tucked into the sleeves that'll drop your phone straight into your hand — a bit of design magic that's one of the brand's signatures.

Decoding the goods — Every piece from acronym is titled with a no-frill sequence of numbers and letters, letting the design speak for itself. The J1L-GT is an updated and elongated version of the J1A, Acronym's very first jacket. Like most of the brand's offerings, it's murdered out, asymmetrical, and looks like it came from the future. Gore-Tex Pro fabric and Microgrid backer keeps it waterproof and breathable, with a storm collar and storm hood for extra protection. Running at 3/4 body length, an Interops expansion gusset allows for movement in the slim silhouette — because you can't kick ass when you're encumbered by your clothes.

More streamlined is the J47-GT jacket, which cuts off at the waist and gets rid of the modular pouch while adding a double-zipper. The P10-DS is a fully articulated pant made of Schoeller 3xDry Dryskin that's water repellant, abrasion resistant, highly stretchable, and dries quickly. Rounding out the drop are two knitted sweatshirts, the S23-AK and C1-AM, both of which feature Cashllama wool. The latter blends it with silk and is more suited for Spring, while the former is light enough for the summer.

Out now — The pieces are available now through Acronym and select retailers like HBX. They're by no means cheap, with prices starting at $946 for the pants and running up to $1,977 for the J1L-GT jacket, but we're talking about the coolest technical gear around. Despite the high prices, Acronym tends to fly off the shelf quickly, especially the jackets. So you better act quick like you're facing the final boss.