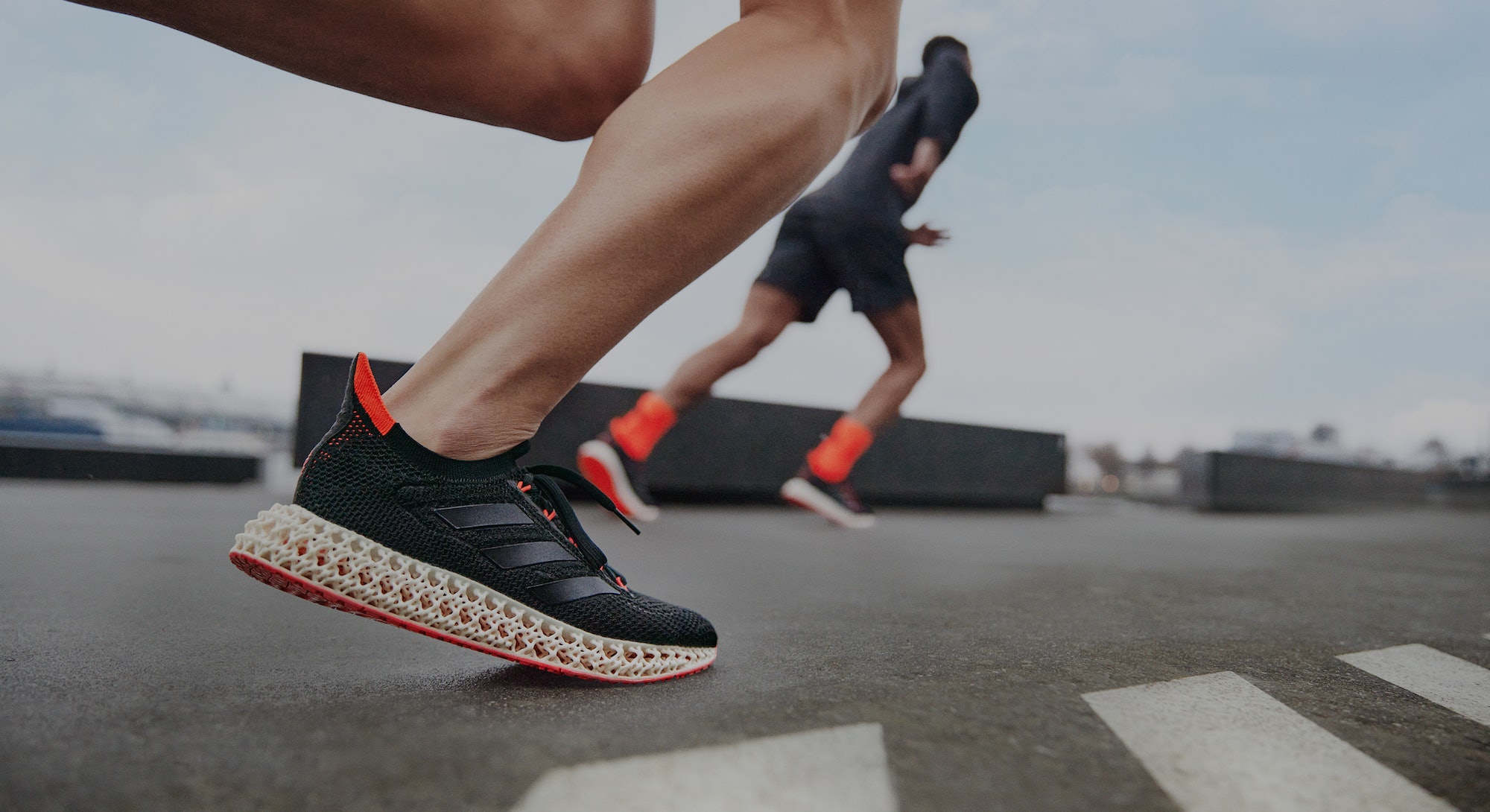 Adidas’ 3D-printed sneakers are about to make an impact on running like they never have before. Or better yet, they’ll change how you impact the ground.

Today, the Brand With Three Stripes introduces the “4DFWD,” a brand new running sneaker with a midsole structure designed to do one thing — push you forward. (Yes, you pronounce the name “Four Dee Forward.”) With 3D printing that uses a digital light synthesis, Adidas has created a new lattice that carefully compresses forward on impact before expanding and sending you in that direction. The exact shape, which sort of looks like a bowtie, was chosen out of five million structures tested and reduces the force of breaking by 15 percent on average, provides 23 percent more cushioning than previous 4D sneakers, and generates up to three times as much forward motion.

To understand how the 4DFWD works, it’s best to see it in action. Slow-motion video shows the midsole almost toppling forward over itself as it condenses upon impact. You’ll also be able to feel the effect while running, as you notice the ground doesn’t seem to slow you down as much as it had before. The transition from each step will almost seem to disappear, Adidas VP of design Sam Handy tells Input.

The 4DFWD marks a new generation for Adidas’ 4D series, as advancements in technology have allowed the brand to precisely tune the midsole’s structure so that it moves from “mechanically down” to “mechanically off.” If you have the lattice in hand and attempt to push down on it, it’ll only fold forward, not down or backward.

Handy shows me the effect with a small cube of the same 3D-printed grid as he says: “When I first had the innovation teams explained it to me, I really couldn’t follow it. And I was just thinking the other night, it’s like ice skating or skis. It delivers a lot of smoothness with this idea of taking away being slowed down.”

The 3D-printed midsole also makes use of a new material that’s 39-percent bio-based and lighter than what was used for previous 4D sneakers. (The full sneaker, in a US size 9.5, weighs just 333 grams.) More sustainable construction also comes through on the Primeknit upper, which is partially made of recycled polyester.

Primeknit is a regular sight on Adidas sneakers today, but that familiarness shouldn’t overshadow how it works in conjunction with the new 4D midsole. Through differing patterns throughout the knit and heating processes used for finishing, the upper locks down in the heel while allowing for more stretch at the vamp so that your foot will move forward with the midsole beneath.

Adidas will first launch the 4DFWD in a “Core Black” and Solar Red” color scheme available in limited quantities on May 15. Sign up for a chance to purchase begins May 6 through Adidas’ app, and the sneaker will become more widely available later in the year.

At the Tokyo Summer Olympics, Adidas will outfit each of its athletes with the 4DFWD. It’ll be the podium shoe should any of them medal in their respective events, and Adidas also says it's suited for recovery runs for athletes at a high level. For the more modestly adept runners among us, the 4DFWD will be a great everyday runner and delivers similar running economy to Ultraboost.

Despite the similarities in performance, the 4DFWD will stick out from the Ultraboost line as more peculiar in its appearance and in the feeling it creates underfoot. In other words, you’ve never felt a sneaker like this and you’ve never seen one either.

Through the new sneaker, the Adidas 4D line is taking a huge leap in performance for what has previously been more interesting for the technology behind it. Since Boost cushioning was first introduced in 2013, we’ve seen every other sneaker brand follow suit with their own lightweight and ultra-comfy foam-based midsoles — but we haven’t seen anyone attempt their own 3D printing in similar fashion.

Why? Because it’s “insanely difficult to do,” Handy says. And with what 4D is now capable of, it’s clear that the effort is worthwhile.