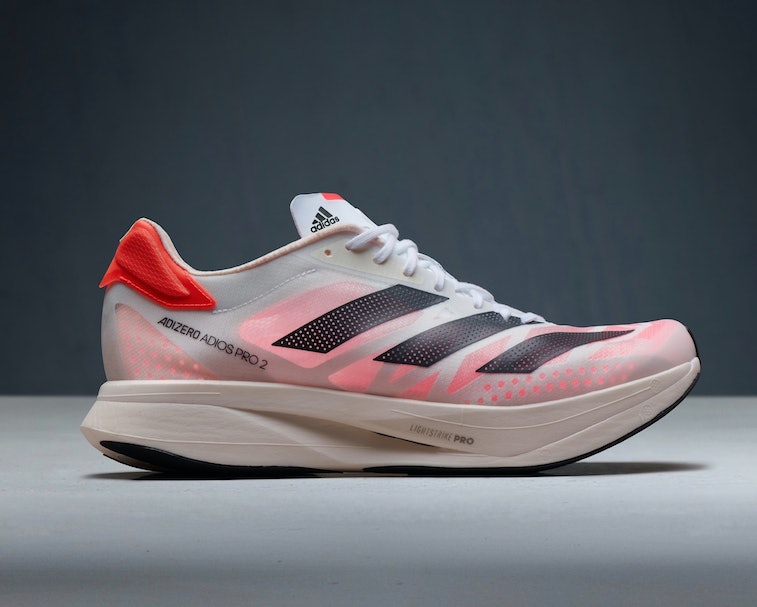 While Nike has dominated the marathon circuit with its Next% series, Adidas has taken over half-marathons with the Adizero Adios Pro first introduced last summer. The German brand’s own top-of-the-line running shoe has been worn for two record-breaking women’s half-marathons by Peres Jepchirchir and by Kibiwott Kandie as he shaved 29 seconds off his own men’s record.

That shoe just got lighter and faster with the introduction of the Adizero Adios Pro 2, which headlines a full collection of new performance running shoes. On the flagship sneaker, the Lightstrike Pro midsole has been re-sculpted with visibly more concave lines to improve energy return. The new shape also allows the wearer to see the carbon fiber-infused Energy Rods, which mimic the shape of metatarsal bones and are the biggest breakthrough in technology for the sneaker.

Also new to the Adizero Adios Pro’s successor is a continental rubber outsole that’s been specifically placed at the toe tip to create an initial grip point and support faster acceleration. Meanwhile, the heel has been reconstructed to prevent slipping, reduce weight, and feel softer for greater comfort.

The rest of the Adizero family— While the Adizero Adios Pro 2 is designed more for race days, the new Adizero Boston 10 is more suited for your everyday runs. It also combines Lightstrike Pro cushioning with the Energy Rods, adding more durable Lightstrike EVA foam and a full Continental rubber outsole that helps the sneaker last longer.

Also included in the collection is the Adizero Prime X, which adds a 50mm heel to “explore and push the limits of the technology” in the Adios Pro 2. And rounding out the series is the brand-new Avanti Track Spike, designed for 5,000m and 10,000m races at this year’s Tokyo Summer Olympics. It too has Energy Rods, only constructed with fiberglass instead of carbon fiber for the stiffness and flexibility needed on the track. At the rear is a SlingLaunch heel, which takes inspiration from rock climbing to lock the foot into place and prevent slip for the speedy races.

Out now — The Adizero Adios Pro 2, Adizero Prime X, Adizero Boston 10 are all out now — with the first two limited to Creator’s Club members until a wider release Friday, June 18.

Prices reflect the level of performance, starting with the everyday Adizero Boston 10 at $140. The Adizero Adios Pro then rises to $220, and the more experimental Adizero Prime X is the most expensive at $240. If you want the track spikes, however, it looks like you’ll just need to qualify for the Olympics.