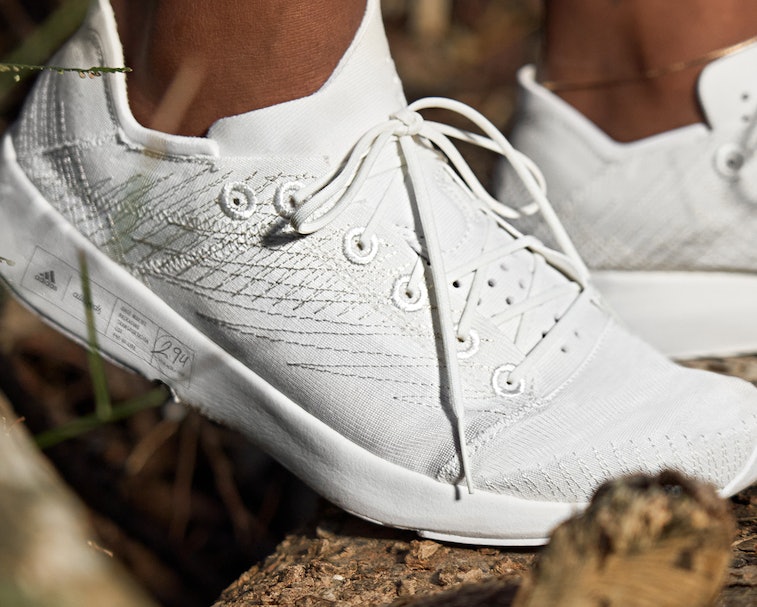 After a year and half since they announced they’d join forces, Adidas and Allbirds will release their first collaborative sneaker this week as part of a mutual drive towards sustainability.

The Futurecraft.Footprint, initially revealed in May, combines the two brand’s respective insights for a sneaker with the lowest carbon footprint either Adidas and Allbirds have ever achieved. Each pair of shoes creates just 2.94 kg of carbon dioxide thanks to a combination of recycled materials and Tencel, which is made out of a wood pulp.

From a stylistic perspective, the Futurecraft.Footprint reads at best as inoffensive white sneaker good enough for those not concerned with wearing the very hottest kicks. But on the sustainability front, the lightweight running shoe makes a remarkable leap to prove why such a rare alliance of sneaker manufacturers is a worthwhile endeavor.

Pulp and polyester — The Futurecraft’s knit, nondescript upper is composed of 77 percent recycled polyester and 23 percent natural Tencel, a soft fabric made from sustainably sourced wood. Sitting beneath it is a midsole that utilizes Adidas’ responsive Lightstrike technology and Allbirds’ sugarcane-derived foam compound. Rounding out the composition is a rubber outsole, 10 percent of which has been recycled.

“Futurecraft.Footprint is an important reminder that we can achieve more together than we can separately, especially when it comes to the race against climate change,” Allbirds co-founder and co-CEO Tim Brown said in a release. “It's been incredible to see this go from a simple yet far-fetched idea of the world's lowest carbon footprint running shoe to a product that consumers can get their hands on in just two years–it's a testament to the power of collaboration in the face of a daunting challenge.”

Adidas and Allbirds’ first collaborative sneaker is slated for a release this Wednesday, December 15, through both brands’ apps and select locations for their physical stores. The all-white sneaker will fetch a relatively low $120 per pair, with an additional four color variants to follow in spring of next year. And even though the initial release will be limited, it could just be a huge step in Adidas and Allbirds’ mission to reduce its respective carbon footprint by 15 and 95 percent respectively.