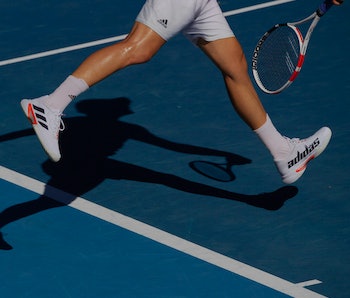 Adidas has brought back one of its most iconic tennis shoes, by which we mean a shoe for the actual sport of tennis. The Barricade was first introduced in 2000 and worn by several Grand Slam winners through multiple iterations. Marat Safin wore the original sneaker for his first Grand Slam Title, while Novak Djokovic wore several iterations from the 4.0 onward until decamping for Asics.

Now, after a three-year hiatus, the Barricade is back and better than ever. The retooled and revived sneaker places an emphasis on durability, stability, and comfort fit for today’s game. It’s already been worn quietly by some of Adidas’ top pros for this summer’s tournaments — including the Olympics — but the sneaker also arrives as fashion has become obsessed with the sport predominantly for its aesthetic alone.

In other words, even if you don’t plan on hitting a court near you, the brand-new Barricade could be a great addition to your rotation.

The new tech — Upgrades in durability come from an Adituff abrasion-resistant material used for the footwear and eyestays, as well as an Adiwear rubber compound on the outsole for similar qualities. The tread also comes in a split herringbone pattern that helps maintain the sneaker’s structure as players slide across the court.

Stability is now achieved with the help of a 3D-printed TPU shank and an asymmetric lacing system that ties directly into the upper without any additional panels. And for comfort, which is the most crucial quality for sneakers of any purpose, the tongue underneath has been packed with foam and strategic perforations to help keep your foot cool. Back in the heel, GeoFit sense pods are intended to provide the feeling of a soft glove. Rounding out the tech is Adidas’ Bounce midsole, which is springy but more supportive than Boost.

“The new barricade is about recognizing what was missing from the iconic Barricade franchise and addressing it,” Carly Tatibouet, Adidas VP of Design Special Sport said in a release. “With the relaunch, we have taken the shoe to the next level to ensure that our players can move with control and confidence, without compromising comfort and durability.”

But it also looks incredible — The sportiness and summer nature of tennis gear have made the sport trendy within fashion, and the aesthetic is worth continuing on your feet with just how great the Barricade looks.

We could talk about the two-tone mesh or lace eyelets partially shrouded underneath, but the real appeal is as simple as the branding on the sneakers’ lateral sides. There, instead of stripes, Adidas’ name is spelled out in a striking font similar to what Kanye West used for his Calabasas apparel. The text should be a nominal detail, but it’s just too hot to ignore — or pass up.

The Barricade has already been available to Adidas Creators Club members since July, but now the release has gone wide with a gold and orange color scheme made for the Olympics. It’ll run you $140 to cop, and it looks as if it’ll be spared from the hype that’ll make it impossible to find without an upcharge.