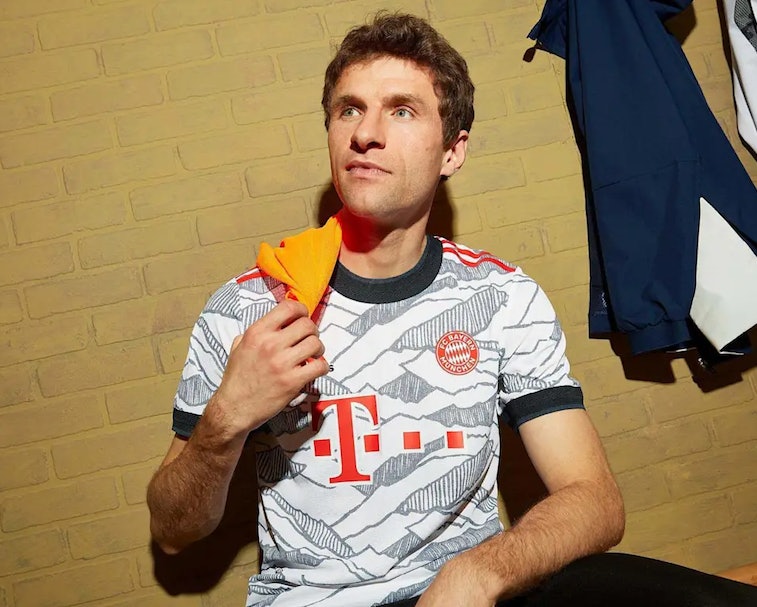 If you’re anything like me, mountainscapes are a quick way to draw your attention. Any article of clothing with peaks warms my little Coloradan heart, and mountain lovers anywhere should fall in love with Bayern Munich’s third kit for the 21/22 season.

The German soccer club and Adidas have saved the best of their kits for last, unveiling a new jersey that takes heavy inspiration from wider Bavaria. A white and blue color scheme invokes the southeastern region of Germany, while all-over print mountains invoke its defining geography.

Bayern’s new shirt is also intended to symbolize its “relentless demand to aim for the highest peaks” — or, in other words, “Mia san mia.” The latter is the club’s official motto, a phrase in the Bavarian dialect that translates to “the complete will to succeed,” and is printed on the rear just below the neck. Fittingly, the kit will be worn by Bayern for its matches in the Champions League, the highest level of competition within Europe.

One player really loves it — Attacking midfielder Thomas Muller, who was born and raised in Bavaria before joining Germany’s top club, is a huge fan of the new shirts. “I love the mountains, I love my home, and I think it’s nice we can illustrate to the whole world this special attitude to life we have here with this jersey,” Muller said in a release.

A promotional video for the third shirt shows off the gorgeous landscapes of Bavaria while also touting Bayern’s track record of inclusion. Goalkeeper Manuel Neuer, captain for both Bayern and Germany, wore a rainbow armband in support of the LGBTQ+ community for a match this summer, which prompted UEFA to investigate and consider discipline. While Neuer wasn’t punished, Germany was told it couldn’t use rainbow lighting for a match at the same stadium where Bayern plays.

Bayern will debut its third kit today for a German Super Cup match against Borussia Dortmund, and fans can now buy the shirt directly from the club’s website. Wider availability, including through Adidas, will begin next Tuesday, August 24.

More like this
Andrea Carrillo
5.23.2022 5:13 PM
Style
Adidas and Balenciaga’s collab will give you a run for your money
Maya Ernest
5.16.2022 7:00 PM
Style
Supreme is dropping Malcolm X gear as a fundraiser for a Black research library
Maya Ernest
17 hours ago
Style
How to dress like emo princess Kourtney Kardashian for under $100