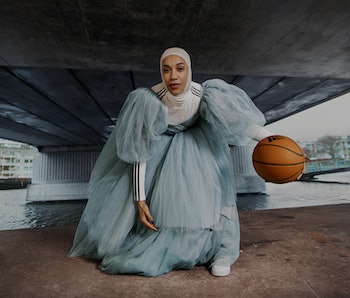 Impossible is nothing to Adidas — or at least that’s how the brand feels about the potential to cater to women in sports. Described as “its biggest commitment to women,” Adidas latest Impossible Is Nothing campaign will focus on three components: products, people, and programs.

It’s a (wo)man’s world — The first is seen through its products, spearheaded by an innovative UltraBoost 22 sneaker that was released December 2021. It addresses the differences between male and female instep height, heel anatomy, and gait cycle trends. Adidas will continue prioritizing women with its product rollouts, it said, including a new approach to sports bras.

The second phase will focus on the global athletes, teams, and creators who help drive female innovation at Adidas. Campaigns for various sporting events like the UEFA Women’s Champions League and Women’s Euro 2022 are already in the works for soccer, and that same idea is spreading into tennis, basketball, and other winter sports.

On a community level, Adidas is also launching more grassroots programs that nurture women and girls in sports. Among the efforts is the Breaking Barriers Academy, which is a five-year program that supports 15 non-profits and trains 100 community champions in Europe. The BBA, the Black Women’s Player Collective, Common Goal, and the Adidas Legacy Program are more of the initiatives that push gender and racial equity.

The brand is on its second year of the S.E.E.D Program, a design initiative led by BIPOC female creators to bring new talent into the sneaker and fashion industry. This year’s S.E.E.D. Program deadline is February 13, so any BIPOC women in NYC are encouraged to apply. And there’s more.

Making the impossible possible — In an industry where women are still fighting to buy sneakers designed for them and see themselves represented in sports merch, the gender reprioritization from Adidas is another step in the right direction for the industry. The effort, which is long overdue, will hopefully spark a chain reaction among other brands and show young women that there’s a place for them in sports and fashion. Women need a seat at the table, too, and Adidas seems to want to make that happen.

More like this
Andrea Carrillo
5.23.2022 5:13 PM
Style
Adidas and Balenciaga’s collab will give you a run for your money
Andrea Carrillo
5.18.2022 3:00 PM
Style
Nike ACG debuts Lowcate sneaker as part of its versatile summer collection
Maya Ernest
5.23.2022 5:35 PM
Style
Not even Astroworld can stop fans from throwing money at Travis Scott