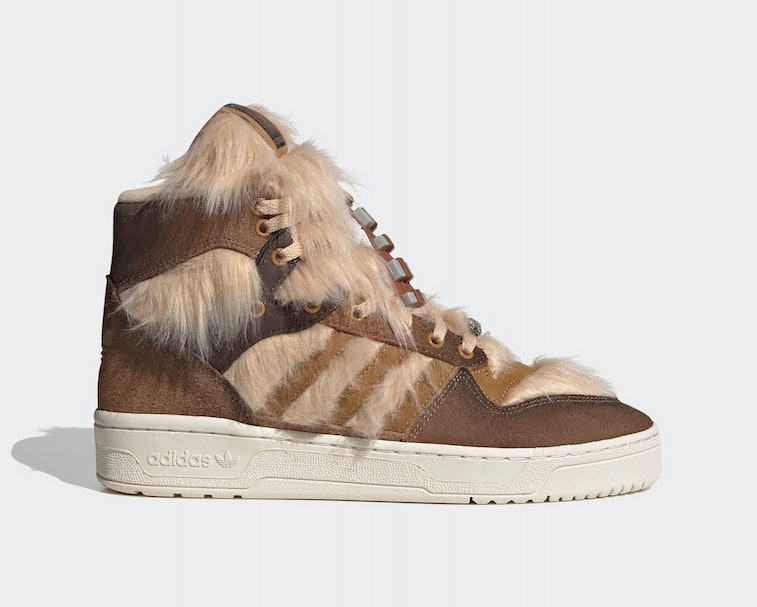 As a way to continue celebrating the 40th anniversary of Star Wars Episode V: The Empire Strikes Back, Adidas Originals is back at it again with a sneaker that pays homage to a galaxy far, far away. Just a few weeks after a Boba Fett-themed silhouette popped up on the brand's online shop, a new Star Wars collaboration has made an appearance: the Rivalry Hi "Chewbacca," which might be exactly what fans of the iconic film franchise want from a shoe based on a beloved personality. Like the Top Ten Hi Boba Fett shoes, these are also covered in details that resemble the movie's character, so you'll notice the light brown hair across the upper that instantly lets you know this is Chewbacca's pair.

A hairy situation — On top of the strands of Wookiee hair that decorate the sneaker, Adidas made a piece for the tongue that's designed to look like the belt Chewie wore in The Empire Strikes Back, which gives a nod to his warrior background. Also on the tongue of the shoes there's a patch with Chewbacca's picture and name on it, along with a sockliner that features graphics of him on it, as well. With the Rivalry Hi being one of its tallest basketball and lifestyle sneakers, Adidas says it was only right to give the 7'5" Chewbacca a style that truly represented his large figure.

It's great that the brand thought about details like the strands of brown hair and the high-top aspect, because it makes the collaboration exciting for both Star Wars lovers and sneakerheads — unlike what we saw with the Yoda, C-3PO, and Stormtrooper pairs from earlier this year.

To wear or not to wear? As with the Boba Fett collab, Adidas has a special packaging for its Rivalry Hi Chewbacca sneakers, which not only makes them look like a toy but also includes dedicated lace jewels and a "collector's" poster. That means if you don't want to wear them, no one can judge you for wanting to keep them in the box and just display as a collectible. It's your money you'll be spending, so do whatever your heart desires.

Speaking of which, right now there's no word on when these will drop in the U.S. That said, according to Adidas' U.K. site, the Chewbacca Rivalry His are set to arrive on that side of the Atlantic next month, on October 26 for £120 (about $155) — so you can expect them to launch here in the States around that same time frame. For now, and until you have a pair of your own, just enjoy these wild Wookiee kicks. And if you can't get enough of Chewie, well, there's always that weird sneaker Kanye West teased recently.