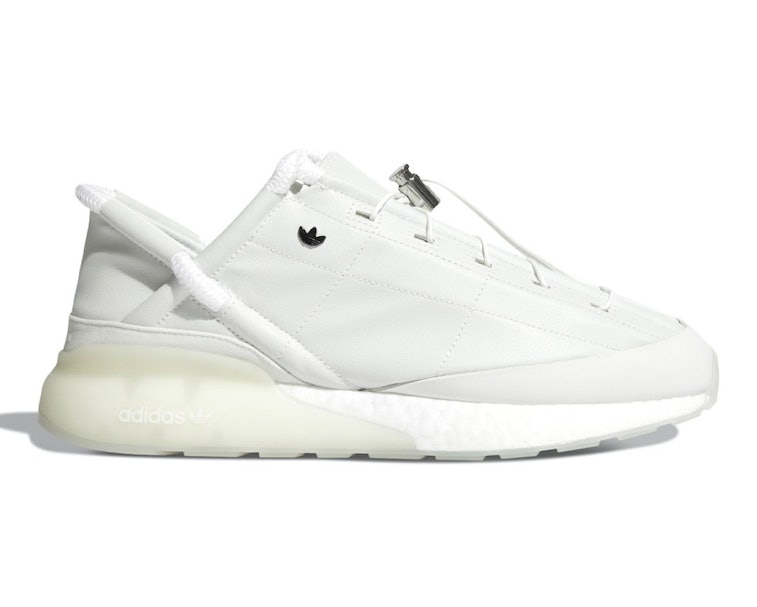 Craig Green and Adidas are looking ahead to the new year, previewing a muted silhouette that becomes even more meager in size. The ZX 2K Phormar II is a collapsible sneaker, utilizing a series of stitched folds to collapse into itself for easy storage. Sneakerheads are well familiar with the difficulties of packing a small kicks rotation while traveling, and Green's new sneaker makes for an obvious and space-friendly choice for any trip.

The upper looks like a moccasin-meets-a-tent, primarily made up of a buttery leather split into panels for easy folding. Lace serves as the tent pole and breaks up the heel from the rest of the shoe. Looking at it, I'd guess you could step onto the heel quite easily to wear it like a mule. And you know what that'd be ideal for? Going through airport security.

Craig Green has really made the perfect shoe for travel. His designs aren't always as easy to wear, and it's refreshing to see his affinity for quilted patterns on a shoe so fuss-free.

It just gets comfier — The ZX 2K Phormar II sits on a boost midsole — and in the year 2020, I don't have to tell you how comfortable that is. Semi-translucent paneling surrounds the foam at the back half of the sneaker in the same shape as Adidas' ZX 2K sneakers.

Lacing can be done in a cinch, with a speed tension system comprised of a tension cord and a sleek metal toggle. What will require more patience is actually getting hold of the ZX 2K Phormar II. It's slated to release February 25, according to Adidas' Australian website, and will arrive in all-black and an off-white makeup. Both have their strong points, but the quality of leather is much more apparent on the black one. And with a $360 price tag, you may just want the version that looks as expensive as it is.

A pared-down sequel — Earlier this year, Green and Adidas Consortium released the Phormar I. While it came in the same shape, the first Phormar was a much louder shoe with three stripes and other detailing appearing underneath a translucent upper. Other Craig Green x Adidas collabs are readily available, but the Phormar I is sold out across the board. If that's any indication of its successors' appeal, you better not let February 25 slip your mind.