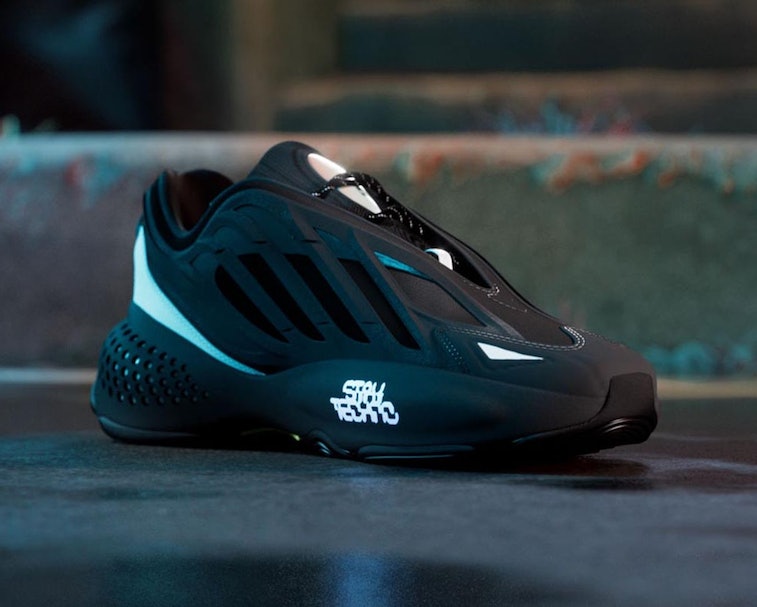 Adidas is collaborating with Japanese graphic designer GUCCIMAZE on a sneaker inspired by the Ozweego — but it brings to mind another shoe from the sneaker giant’s most-hyped creative partner.

The sneaker at hand is the Adidas Ozrah, a lesser-known silhouette born out of the Ozweego family. GUCCIMAZE’s take on the shoe just so happens to conjure similarities to the Yeezy Wave Runner, thanks to its near-monochrome makeup and dramatic cut-out lines. And even though the former doesn’t have the same open-air qualities as the latter, what’s to stop you from taking a razor to the Ozrah to make it even more like Yeezy’s highly acclaimed foam sandal?

GUCCIMAZE and Ozrah are using their limited edition sneaker to pay homage to rave culture, a space where Ozweego kicks have proven especially popular. “Stay Techno” is printed onto the midsole’s lateral side but can only be seen under a UV light, and further reflective detailing encourages you to wear the kicks where artificial light is in abundance.

You don’t have to play surgeon — We fully endorse a little DIY project in making the Ozrah’s cut-outs even more prominent, but doing so would come at the expense of an “Adidas Ozrah” logo created just for the occasion. The retro-future mark is in line with GUCCIMAZE’s signature aesthetic and appears beneath the retooled TPU cage as the most overt twist of the collab.

AdiPRENE cushioning underfoot will make the Ozrah comfortable enough for a rave that lasts well into the night and beyond or anything else that may require you to be on your feet at length. In one word, GUCCIMAZE has created one awesome sneaker — and one that fits in well with the revival of early- and mid-aughts trends.

The GUCCIMAZE x Adidas Ozrah is slated to release Wednesday, February 23, through Adidas’ website for a relatively palatable $140. Although it won’t be among the most hyped sneakers of the year, it could just end up one of the most underrated.