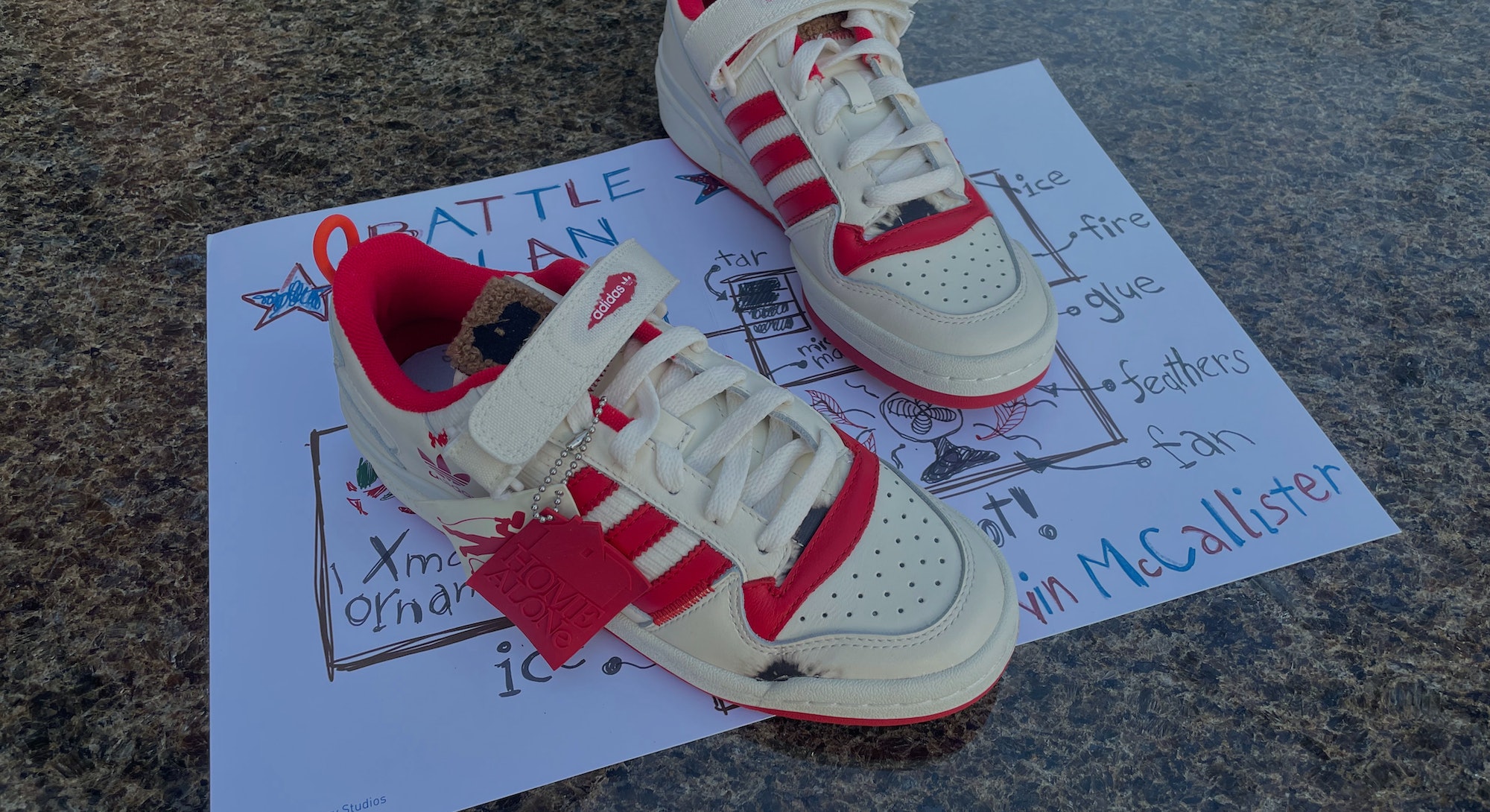 “All the great ones leave their mark,” said the Wet Bandits in the 1990 film Home Alone.

Little did either thief know what marks they would leave the McCallister house with — or what mark their iconic characters would leave on the world of holiday cinema.

Accordingly, the Wet Bandits, and Kevin McCallister’s bid to beat them, have been commemorated by Adidas with near-replicas of Kevin’s on-screen kicks — which were, in fact, a pair of Three Stripes. Synthetic burn marks, stitching, and tufts of carpet literally put the wearer in McCallister’s shoes, while film-inspired packaging details the protagonist’s home defense plan.

As a fan of both the footwear and the film, I couldn’t wait to try out these Home Alone sneakers. Unpacking the shoes was really like opening a Christmas gift: While they arrived in Adidas’ classic blue box, the packaging came wrapped in paper detailing Kevin’s defense plan. A note, “handwritten” by the protagonist, finished off the wrapping, reading, “Merry Christmas you filthy animal!”

Filled with Home Alone references, the Forum Lows are sure to please even die-hard fans of the film, without going over the top. Featuring a cream base and red accents, the shoes memorialize Kevin’s own Forums in the movie, while burn marks near the front of the sneakers allude to his fiery feud with Wet Bandits Harry and Marv — which luckily enough, didn’t “burn down the joint,” as McCallister puts it.

A set of three graphic insoles offer a better look into the thieves’ adventure, bearing photos of Harry and Marv caught up in Kevin’s traps of shaving cream and television trickery. Removable dubraes further help wearers customize their Home Alone kicks, taking on the shapes of irons, maintenance vans, fire extinguishers, fans, broken ornaments, and cans of paint. Co-branded chenille tongue tags, as well as white corduroy hits, nod to Kevin’s winter outfits throughout the film while a note hidden within the Forum’s signature strap opens to reveal McCallister’s quote, “This is my house, I have to defend it.”

At the heel, tiny metallic “M” charms — which technically stand for McCallister, but also happen to be my first initial — finish off the design. When walking, the red charms’ color shifts in the light, much like an ornament shining under the lights of a Christmas tree.

HOME (ALONE) IS WHERE THE HEART IS

To properly style my Home Alone kicks, I took a hint from McCallister’s ‘90s look and paired the sneakers with a set of corduroy-esque pants, which matched the shoe’s chenille tongue tags. Channeling Kevin’s signature red sweater, I opted for a red puffer jacket, coordinating the color with the red details on the sneakers.

Having already worn and loved Adidas’ classic Forum model, I knew the Home Alone iteration would give me the same feeling of comfort: As a sneaker initially made for basketball, the Forum boasts a plush insole, grippy outsole, and secure hook-and-loop ankle strap. Yet I didn’t expect to love the thematic version of the shoe more than the original — who knew a few design tweaks could make the retro sneaker even better?

Amid a market of over-the-top holiday designs, Adidas’ Home Alone Forum Lows keep things minimal, meaning the kicks can be worn no matter the season. Only at a closer look can people see the commemorative details — and with Adidas focusing on sustainability, it’s only fitting the shoes should withstand years of wear and changing trends. The exploding popularity of the 1984 Forum model proves the silhouette is as classic as the beloved holiday movie and similarly, will never go out of style.

They may run out of stock, though. Only a few pairs of the Home Alone Forum Lows are lingering at retailers like Champs Sports, Selfridges, END, and Hibbett. At just $110, the sneakers are only $20 more than Adidas’ original Forum Low — except they come with special edition wrapping paper, lace dubraes, and extra insoles and are still minimal enough to wear everyday. You’ll never get bored of the Home Alone Forum Low shoes, just like you never get tired of hearing, “Merry Christmas, you filthy animals.”