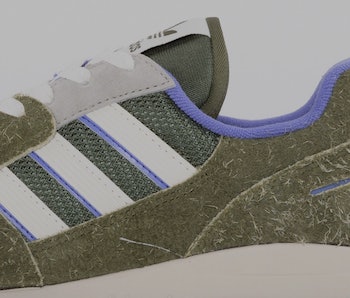 Almost every holiday has a sneaker release to match, and this year, 4/20 is no exception. Using its ZX 1000 sneaker — renamed the ZX 420 for the occasion — Adidas is celebrating the beloved stoner holiday. With fuzzy green details and hits of lavender, the sneaker looks as smooth as your favorite strain.

Getting grassy — The Adidas ZX 420 bears a striking resemblance to Nike’s Skunk Dunks, with similar construction. A hairy green textured upper — slightly lighter than the forest green of the Dunks — nods to nugs and Nike alike. Adidas has also incorporated purple accents into its shoe, like the Dunk, but again has lightened the shade to avoid completely copying Nike’s design. And instead of the lavender color dressing up a Swoosh, the hue hits Adidas’ Three Stripes, the shoe’s midsole, and heel and collar accents.

The brand’s signature Three Stripes are kept white to stand out from the shoe, matching the sneaker’s white laces and tongue tag. Hits of gray then dress up the ZX 420’s eyestays and mesh toe boxes — perhaps a nod to smoke coming from a blunt, bong, bowl, dab rig, or whatever your preferred smoking method is.

While we can’t say we prefer Adidas’ 4/20 iteration over Nike’s, we’re happy the brand is including April’s festivities in its sneaker lineup. Nike, after all, has had over a decade to perfect its weed-themed drops, so this ZX 420 may just be the start for Adidas. In the future, we hope to see more original — yet still cannabis-centric — drops from the brand.

Roll up and roll out — Adidas’ sneakers may not be as loud as your favorite strain (or sneaker), but the ZX 420 is still a great way to celebrate the stoner holiday. Pairs are available now internationally, while we’re expecting a 4/20 release on Adidas’ website.

Keeping in line with other ZX 1000 silhouettes — and offering a much cheaper option than buying the Skunk Dunks resale — the sneakers are set to drop for $100. Make sure to set an alarm or cop before your festivities to avoid an unenjoyable burn.