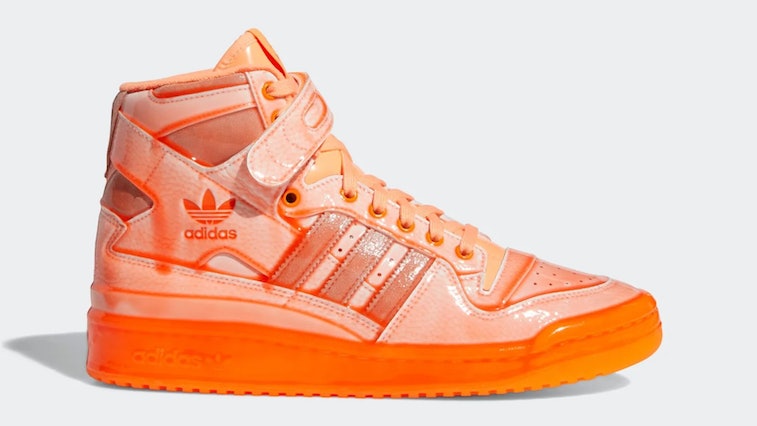 Adidas confirmed the return of collaborator Jeremy Scott — and his stuffed animal and Wings designs — earlier this month. The duo’s first offering has now landed, though it doesn’t include any of the aforementioned details. Instead, Scott’s debut release takes on Adidas’ Forum Hi silhouette, dressing the sneaker in a jelly-like texture.

As a classic Adidas model, and one of Scott’s favorites to work on, the “Forum Hi” serves as the perfect canvas for the designer’s return. And with careful social media promotion from indie influencers like Devon Lee Carlson, alongside recent collaborations with Bad Bunny, the Forum Hi is set to dominate the coming months — perhaps finally succeeding the reign of Nike’s Dunk sneaker.

Jelly sandals, but make them sneakers — Scott’s makeover of the Forum Hi only makes it that much more irresistible. Featuring glossy, monochromatic uppers, the shoe comes in four vivid colors: orange, blue, teal, and grayish black. Each boasts the Forum Hi’s customary strap at the ankle, while the tongue’s usual Adidas branding has been replaced with a graphic of Scott’s face.

Certain areas of the sneaker sport a more opaque jelly look than others, making it look like whatever substance lies on top of the shoe was poured over it in a nonchalant manner. Because of this production, each sneaker could end up looking a little different from the next, though all pairs boast tonal laces and the signature Three Stripes on their sides. Our burning question is: What do these sneakers feel like? Is their jelly upper squishy, or does it have a more wax-like finish? And how do we get our hands on these fluorescent kicks?

Just the beginning — According to Adidas, these Forum His will arrive this fall, though a specific launch date has yet to be announced. Supposedly, the outlandish designs we associate more with Scott — including the JS Bear, JS Poodle, JS Gorilla, and JS Wings — will join the jelly-like Forum Hi, which honestly seem tame in comparison.

The announcement of Scott and Adidas’ collaboration renewal led many eager fans to expect re-releases of his ‘00s models. And while the vibrant Forum Hi iterations may have some feeling underwhelmed, know more is coming: In a statement about the partnership, Scott claimed Adidas was letting his “imagination go wild.” If the designer’s past sneakers are any indication, Scott’s imagination is just warming up.