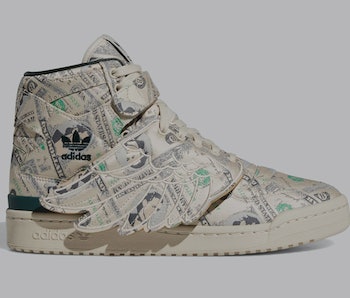 After renewing his collaboration with Adidas — which initially spanned from 2003 to 2015 — Jeremy Scott announced he would bring his signature designs from his first era alongside the brand. Among poodle-topped shoes and teddy bear slippers, Scott plans to re-release his money-printed Forum Wings sneakers as a tribute to his first project with Adidas.

First released in 2003, Scott’s cash-covered kicks served as the designer’s earliest work with the German brand. Only 100 pairs of the printed Forum sneakers were made for his namesake label in Los Angeles, before Scott’s Adidas line grew in popularity and he later released the shoes with Wings add-ons. Now, nearly 20 years later, we’ll get to enjoy the sneakers in all their glory.

Return of the riches — Much like the original money-printed Forums, the upcoming shoes bear an off-white upper that allows their green and grey cash pattern to shine. Yet the American dollar shown on the sneaker isn’t quite accurate — Scott’s own face replaces the historical figure typically found at the center of the bill.

In true maximalist Scott fashion, everything on the Forum’s upper features the money graphics, save for its cream laces and deep green accents. The darker shade covers the shoe’s medial Three Stripes, midsole, and tread to give Adidas some credit, while Scott’s signature is etched onto the medial midsole for good measure.

Put your money where your feet are — According to Adidas, the cash-covered Forum Wings are set to arrive in the fall, though a specific launch date has yet to be announced. It’s likely a drop will align with New York Fashion Week in September, granted Scott isn’t too busy with his work at Moschino.

Contrarily, Complex reports that the new wave of Jeremy Scott x Adidas shoes are scheduled to drop in August, when the brand plans to release 2,400 winged pairs of his money-printed Forum His. A low version of the style will arrive in October, Complex claims.

No matter when the sneakers drop, however, they’re bound to be as limited as they are coveted. The dollar-decorated Forum Wings will literally give you a run for your money — and that’s given you can afford them. While no pricing information has been made available, the shoes are expected to retail around $200.

“In a reasonable world, you know, you shouldn’t have to wager two months rent to have some big, fun fashion,” Scott said to Vogue, expressing his desire to make his Adidas collaboration affordable. But with the designer transitioning from high fashion to streetstyle again, we hope he can follow through on his aspiration of accessibility.