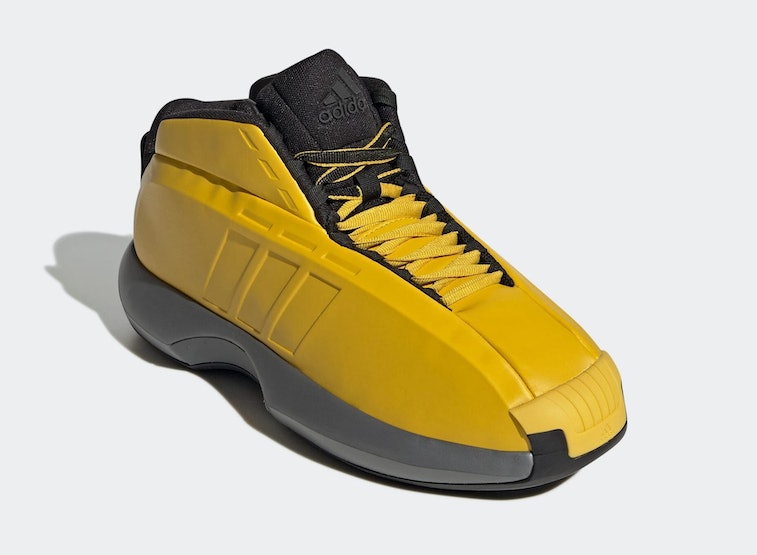 Last July, a source familiar with Adidas’ upcoming releases told Complex that the brand planned to release two of the sneakers Kobe Bryant wore while he was signed to the label through the late ‘90s and early ‘00s. Today, Adidas confirmed the report with official imagery of the Kobe 1, Bryant’s first signature shoe with the brand.

Essentially a replica of the original 2001 model — donned by Black Mamba himself at that year’s NBA All-Star Game — the sneaker features a predominantly yellow upper, black bootie, and recognizable shell toe. To any fan, it's clear the retro shoes are Kobe’s, but without the approval of the Bryant estate, Adidas has to market the kicks without the late basketball player’s name. Accordingly, the Kobe 1 is now known as the Crazy 1 — symbolic of how sneakerheads will act once the shoe drops.

Crazy 4 Kobe — Inspired by the Audi TT Roadster sports car, the sneaker boasts a bulky upper decked out in a “Sunshine” yellow color scheme. Black nylon outfits the tongue and heels as a gray EVA foam midsole adds extra chunk to the sole unit. There’s no branding nodding to Kobe on the Crazy 1 — there wasn’t ever, even when it was called the Kobe 1 — but Adidas’ Three Stripes logo comes debossed at the sides of the shoe. Expect more of a “if you know, you know,” hype to surround the upcoming sneakers.

Adidas has yet to announce when exactly the Crazy 1 will drop, although it's expected to release sometime in April to coincide with the McDonald’s All-American Game. The sneaker will (unofficially) be the first signature Kobe silhouette to re-launch in about a year: After Vanessa Bryant allowed her late husband’s contract with Nike to expire in 2021, the company made a mess of their partnership, proceeding to make, distribute, and recall a Nike Kobe 6 Protro “Mambacita” sneaker that wasn’t even intended for production.

Evidently, the brand’s disrespect turned the Bryant estate away from participating in any further brand deals, quickly destroying any hope that a new Kobe shoe would ever emerge. Vanessa, however, has since launched her own “Mambacita” brand to carry out future commemorative drops — and while not technically endorsed, Adidas’ “Sunshine” Crazy 1 sneaker is a sweet surprise for Lakers fans. That is, if they can score a pair.