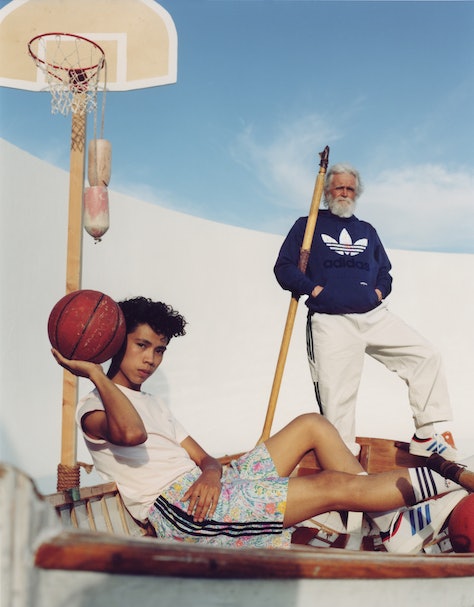 For Noah’s second collaboration with Adidas, the New York-based menswear brand is continuing to make its case for the best sportswear coming from the ‘70s.

Another capsule of old-school sneakers and apparel is headlined by the “Probound,” a forgotten basketball sneaker from Adidas’ archives. The low-frills, low-top sneaker mixes red, blue, white, and grey across an upper made of mesh and suede. A faint trace of blue can be seen underneath the mesh toe panel, helping to secure Noah’s Probound as a subtle hit to wear all summer long.

More well known is the “Rod Laver Super,” a tennis sneaker named for the tennis great and not dissimilar to the Stan Smith. It’s been given a mismatched color scheme, with the outsole and mustache coming in dark blue on the left shoe and in green on the right. Appearing on the tongue of both silhouettes is Noah and Adidas’ shell logo, which was first last year and signifies their striving towards sustainability.

Pair ‘em with some retro apparel — Similar to its first collection, Noah has decorated its apparel with a print you’d expect from more sophisticated attire. A floral print tracksuit looks like your grandma’s tablecloth in the best possible way, making the kit as pretty as it is sporty. The same pattern is also used for all-over prints shorts, as well as being rendered more subtly into the graphics on T-shirts, hoodies, and hats.

For the first time, Noah and Adidas are also doing workwear together with a matching canvas long-sleeve shirt and pants. Navy striping down the sides brings in Noah’s love for all things nautical — enabling you to mix your best sailor and craftsman at once. Even the more active apparel keeps things simple, which was a conscious decision by Noah co-founder Brendon Babenzein.

“I’m not a technical person,” Babenzein told Input last year. “My shoes are the most technical thing I own because there’s no way around that. After that, I run in really basic stuff. And what we did was marry that with technical stuff like recycled nylons and polyesters, but it all feels regular. It doesn’t feel high-tech. There are a lot of people I meet who say they don’t want that stuff unless they’re racing.”

A week-plus til launch — Noah and Adidas’ second collection is slated to release June 17 with plenty of chances to cop. Noah and Adidas’ websites, as well as the Confirmed app and select other retailers, will all stock the drop sure to liven up your workout attire. And if you just plan on chilling in it, the floral print will have you looking sharp for that, too.