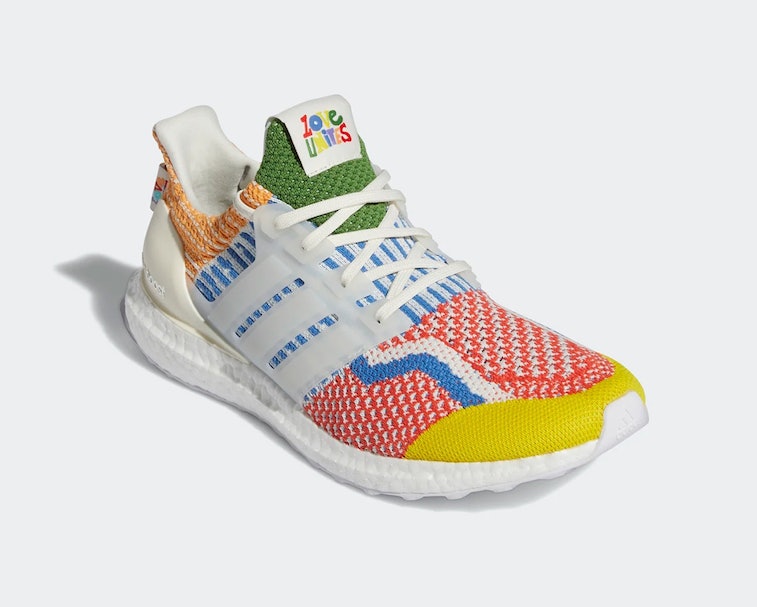 Pride Month has become one of many annual holidays in which all the sneaker brands trot out limited-edition sneakers to c̶a̶s̶h̶ ̶i̶n̶ celebrate. And like those other holidays, the shoe releases more often than not turn out exactly as you’d expect — in Pride’s case, lots of rainbows.

Adidas, however, has avoided the obvious with its upcoming UltraBoost 5.0. The Pride sneaker makes use of a multitude of colors without arranging them in an obligatory rainbow. Instead, the near-full spectrum of colors comes blocked in a variety of patterns that makes the shoe one of the more fun UltraBoosts we’ve seen.

Without the rainbow as the Pride signifier, “Love Unites” appears on tags on the tongue and hanging off the heel like a banner.

Stripes and solids — The upper’s Primeknit construction is highlighted by the disparate patterns, which include stripes of varying widths and in waves that anchor the toe. Adding further contrast is a solid yellow toe cap and green coming at the top of the tongue.

The rest of the shoe makes use of several shades of white, including an off-white heel stabilizer and translucent cage on the upper. Inside, “Love Unites” appears once again alongside the Adidas logo on the footbed. While we’re still early in the game and yet to see what Adidas’ competitors will churn out, its Pride Ultraboost is going to be hard to top.

Releasing with plenty of time to spare — Adidas will release its Pride Ultraboost 5.0 for the standard $180 on May 15. By dropping the sneaker two weeks before Pride Month begins, the company ensures you’ll actually be able to wear it for the duration of the month. And with the return of parades after a COVID-induced hiatus last year, you won’t find a more comfortable and thematic sneaker to wear for the occasion(s).