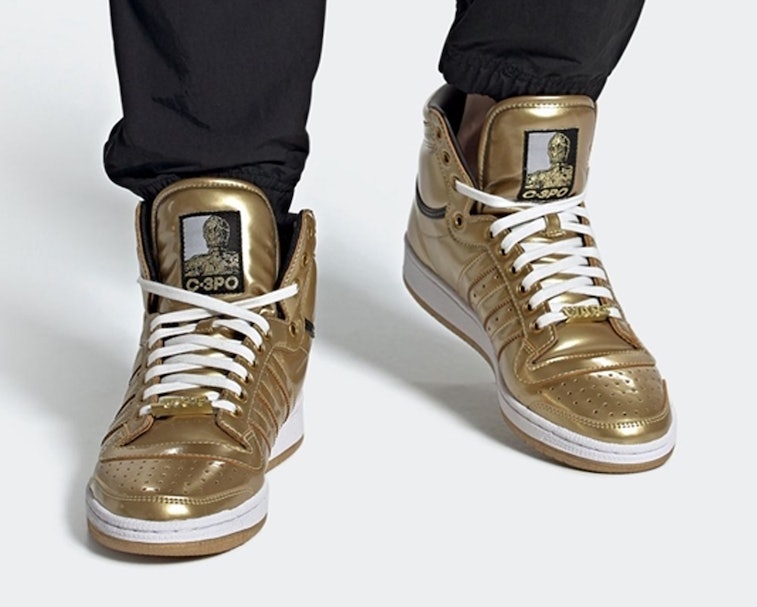 Adidas and Star Wars have now been collaborating for a decade, and few of the sneaker releases have justified the partnership. That continues to be the case as a new pack has surfaced with aesthetic inspiration from Yoda, C-3PO, and Stormtroopers.

The respective silhouettes certainly don't help — the Ultra Boost, Top Ten Hi, and NMD R1 — but it's time to admit that the iconography of Star Wars' beloved characters doesn't necessarily lend itself well to sneakers. Yes, Star Wars and sneakers rock, but the sum of these collaborations' parts doesn't add up to anything greater. What we're looking at is the distasteful result of rampant merchandising, which Star Wars may be culpable for more than any other intellectual property in the world.

The bad, the bad, and the ugly — Worst of all in this trio of upcoming sneakers is the gilded C3-PO Top Ten Hi, which may as well be the Supras worn by the scummiest weed dealer you knew in high school. Gold rarely, if ever looks good on sneakers, and Donald Trump's fondness for skeet shooting the color on everything should have us wary of it anytime it surpasses accenting. The Star Wars logo lace dubraes make me want to vomit banta milk.

The Yoda Ultra Boosts and Stormtrooper NMD R1's are significantly less offensive, but no more inspired. Hitting these sneakers with color blocking from the character's and giving them name tags on the tongue do little to raise excitement, especially when we're dealing with two tired silhouettes. Ultra Boosts and NDMs were some of the hottest sneakers as recently as 2016, but Adidas has unsuccessful tried to let them rest on their laurels with only modest updates. Does that sound like any recent films set in a galaxy far, far away?

Perhaps this partnership is fitting — Just not in the way Adidas and Star Wars have intended. Both are in a period of decline, with Star Wars failing to achieve the same adoration as the Marvel Cinematic Universe and Adidas losing any momentum it once had over Nike.

While Nike was never in any real jeopardy of losing its spot atop the market to Adidas, it was the latter brand who was pushing the envelope more creatively five years ago. It had poached Kanye West away from its biggest competitor, started the trend of collaborating with high fashion designers, and introduced Boost technology that the rest of the industry would emulate. Now, Yeezy has become oversaturated, Nike is doing proper fashion collabs better, and Boost is no longer a trump card.

We're waiting for something fresh to come out of Adidas, and the company just hasn't delivered.

Someone will still buy these — Some of the most stylish dudes I know are huge nerds, and not just about clothes. None would be spotted wearing these, and it's hard to imagine anyone really latching onto this upcoming sneaker pack. A release date hasn't been set, but I need that even less than I need the next Star Wars trilogy.