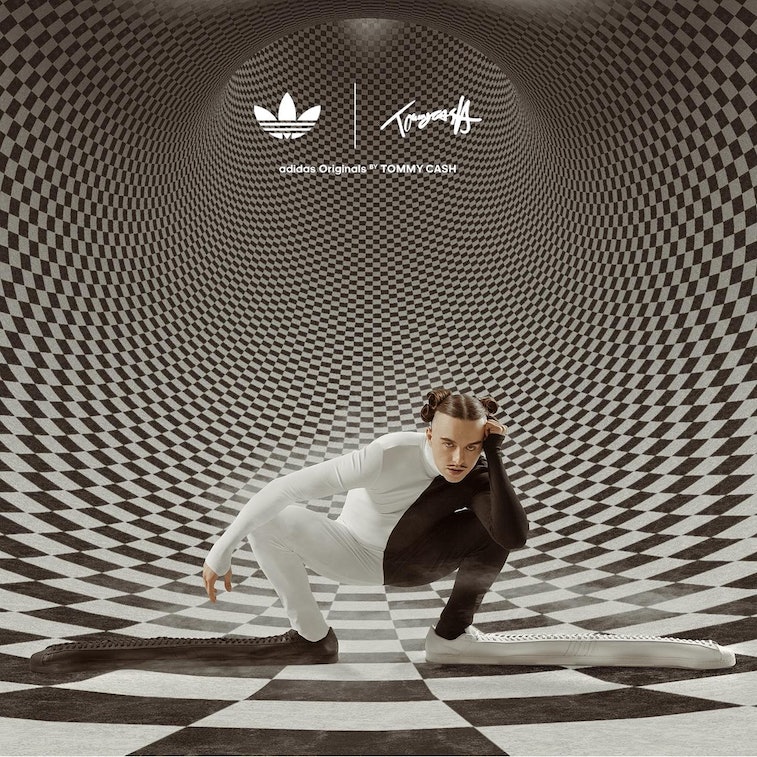 Adidas has partnered with rapper Tommy Cash to take a big step out of its comfort zone. The two debuted a collaborative Superstar, which boasts monochromatic coloring and about two or three feet of extra toe room. As Adidas’ longest model yet, the Superstars have been produced in highly limited quantities and will be available through a raffle until March 3.

The news, first reported by Hypebeast, has sent Twitter into a rightful frenzy. But this isn’t the first time Adidas has made a product with the intention of going viral on social media. The brand tapped Boston Dynamics’ robot to deliver its new Pharrell Hu NMD, and videos of the robot dancing and posing with the shoes spread all over Instagram. Adidas also partnered with Craig Green to create an experimental leather sandal, which was dubbed a luxury leather orthopedic brace by Twitter users.

With these designs and seeding features — both released in 2021 — the brand has repeatedly demonstrated its knowledge of social media marketing, even if the product advertised isn’t hitting store shelves. Nowadays, hashtags, likes, and shares can be just as valuable to a brand as an exclusive sneaker — but this Tommy Cash clown shoe may be the most exclusive of all.

One step at a time — While the actual length of the collaborative Superstars hasn’t officially been announced, Cash revealed the point of his partnership with Adidas was to create “the longest shoe in the world.” By looking at photos of the sneakers, it looks as if they’ve succeeded — though the Superstars may not be very functional for walking.

Despite their length, the Superstars stay true to their original silhouette. Coming in all-black and all-white shades, the shoes boast laces all the way from their tip to their tongue, and seem to flaunt the usual Adidas branding on the heel. As the brand is known for its Three Stripes — no more or no less — the Superstar sports its usual Three Stripes in the middle of its sides, though the sneaker’s length implies there should be more.

The ridiculousness of the shoes helps not only the sportswear brand, but its collaborator as well. Tommy Cash hasn’t quite made himself a familiar name in the U.S., but is very popular in Europe, where he’s known for his flamboyant fashion. Nevertheless, the Estonian rapper is slowly climbing the ranks, and has already collaborated with fellow artists Charli XCX, Little Big, and A.G. Cook, among others. It’s his partnership with Adidas, however, that’s now boosting Cash to greater heights — and lengths.

They’ll be gone before long — According to Cash's Instagram, his limitless shoes are actually “very limited.” While a specific number wasn’t listed, the artist teased that only a few of his collaborative Superstars would be available for raffle winners.

To enter the raffle, consumers must register through the Adidas app, where winners will be chosen at random on March 3. Considering how exclusive the lengthy sneaker is, it’s a long shot to win — but imagine how good your clown cosplay could be.