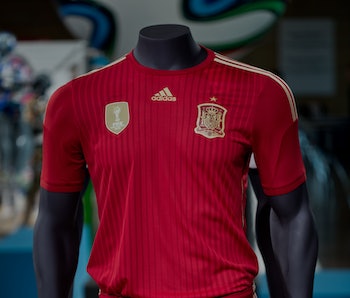 Adidas is immediately suspending its partnership with the Russian Football Union following the country’s invasion of Ukraine, Bloomberg reports. The German brand — which is Europe’s largest sportswear manufacturer — has worked with the football union since 2008, providing official sportswear for both the men’s and women’s national teams.

Groups like FIFA and the Union of European Football Associations (UEFA) join Adidas in censuring Russia. According to Bloomberg, the three organizations decided on February 28 that all Russian teams, regardless of national or club status, would be suspended from participating in both FIFA and UEFA competitions until further notice.

Russia goes sans soccer — The UEFA stripped Saint Petersburg, Russia, of hosting the Champions League Final, moving the game to France. FIFA followed up by banning Russia from playing in the 2022 World Cup in Qatar, one of the world’s biggest sporting events. A boycott from Adidas, which holds a seat on FIFA’s independent advisory board for human rights, only made sense.

As the deadly crisis in Ukraine escalates — leaving millions of citizens in danger — a number of companies have suspended services in Russia. The International Olympic Committee has urged sports federations around the world to exclude athletes from Russia and Belarus. Russian companies have also been cut out of the playing field: Manchester United split from Russian sponsor Aeroflot, while German football club Schalke ended its sponsorship deal with Gazprom.

Will this actually impact Russia? — The soccer sanctions certainly make a statement to Russia, although it’s unlikely they make an impact on Russian President Vladimir Putin’s next move. It’s worth noting, however that there’s power in numbers — and Adidas joins other mainstream companies like Visa, Disney, Shell, Netflix, and Mastercard in suspending services to Russia. Both Meta and Twitter have also implemented new measures to safeguard Ukrainian users’ information and data.

Still, the situation overseas is incredibly grave: As Russian athletes lose their playing fields and uniforms, Ukrainian citizens are losing their homes and loved ones. The UN reports that more than half a million citizens have fled Ukraine since Putin launched the invasion, and there’s no timeline for when — or if — they’ll be able to return home.