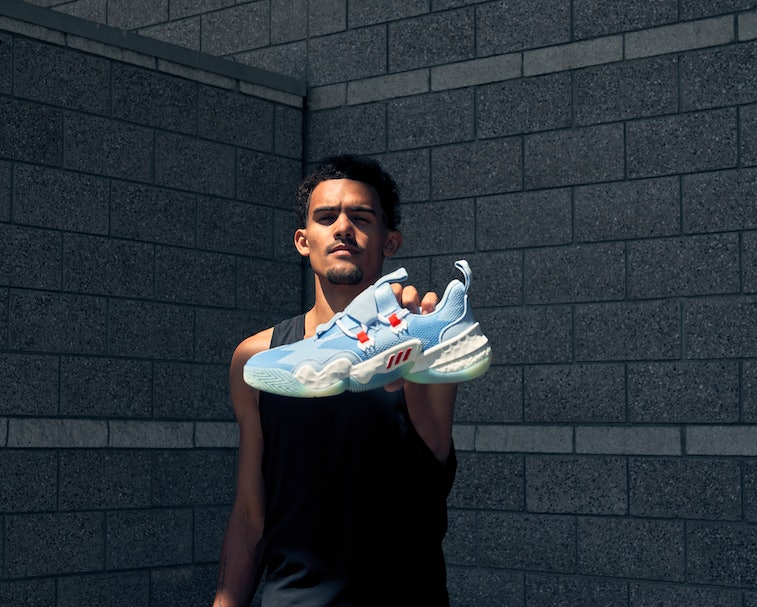 Adidas is reviving its basketball division by partnering with Atlanta Hawks guard Trae Young, introducing a signature namesake sneaker and apparel collection. Young, who became the first player in NBA history with a 45-point, 10-assist game in the Conference Finals, did so while wearing the brand’s new Trae Young 1 shoe, making for a great marketing campaign prior to the sneaker’s imminent release.

“Adidas and I worked very closely on my first signature shoe and I’m hyped to finally let fans get a hold of them. When you wear these, you’re repping that ice cold mentality and the entire city of Atlanta,” Young said in a press release. “This moment is really special as it’s a reminder to the next generation of hoopers that through hard work and focus you can achieve your dreams. Trae Young 1 is a symbol of that for me.”

Ice cold — The Trae Young 1 was developed in close collaboration with Trae himself, designed to support his multi-directional playing style and the unique ways in which he moves on the court. Inspired by the laceless N3XT L3V3L model worn by Young in his first NBA season, the sneakers have a half-bootie construction paired with laces for extra support. Adidas’ Boost cushioning lines the heel for comfort, while a Lightstrike midsole provides lightweight responsiveness. A tongue cover lays over the lace unit for extra security.

According to a press release, the Trae Young 1 was made in tribute to the basketball player’s “ice-cold mentality and the music, culture and legacy of the city of Atlanta,” and will be available initially in five color schemes: Icee, an icy blue with red accents; Icee Cotton Candy, an ombre blue and pink; So So Def ATL, a yellow and red, Peachtree, a peach and green, and So So Def, a classic black and white. All models pay tribute to Young’s youth, whether through channeling his favorite snacks or his hometown of Atlanta.

“Trae embodies the mentality of limitless potential — unafraid to let anything get in the way of his ambition, he pushes boundaries, proves critics wrong and creates new space for himself and the game,” Adidas Basketball General Manager Eric Wise said in a press release. Hopefully, his signature sneakers will inspire (and help) others to push themselves to the same level.

Dropping soon — Icee and Icee Cotton Candy variations of the Trae Young 1 shoes will be available on Adidas’ website starting October 1 alongside a commemorative quarter zip windbreaker, pant, and short. So So Def and So So Def ATL color schemes debut on November 5. All models retail for $140, excluding the Peachtree color scheme which releases on November 19 for $130.