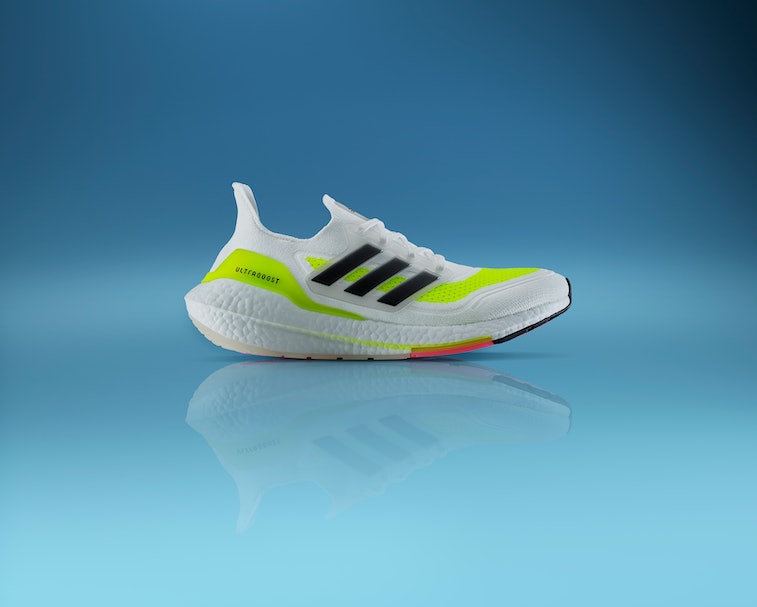 A new year brings a new UltraBoost, and in 2021 Adidas' flagship running sneaker is more attractive than it's been in years. The UltraBoost 21 fills in the gaps of the heel frame in a return to the original look, but the rest of the sneaker takes a fresh approach while creating striking lines.

Adidas' Three Stripes appear as a plastic badge with translucent outlines, and the banded Primeknit upper is matched by a faint stripe on the beefy Boost midsole. The outsole bears the most visible changes, with several different traction patterns making it more complex (and colorful) than ever.

Those who wear the UltraBoost casually should be pleased with the new aesthetic, and runners too will be pleased by the advances in technology.

Let's hit the specs — The UltraBoost 21's principal improvement comes from a redesigned Linear Energy Push torsion system, which uses a stiffer, reinforced material in the midsole to flex 15 percent less in the forefoot and increase responsiveness. The midsole is visibly thicker at the heel, packing 6 percent more Boost than last year's model to provide more energy return and comfort.

On the sustainability front, the Primeknit upper is made from 50 percent recycled Parley ocean plastic — continuing Adidas' push to make Parley more core to its production. The lightweight material is knit into a "more precise" pattern to allow more movement while also increasing support.

Adidas really wants you to run in it — While COVID and the isolation it's forced upon us puts our mental health on shaky ground, Adidas is touting the benefits of running in its promotion for the UltraBoost 21. A study commissioned by the brand found that runners were 20 percent more likely than non-runners to experience increased energy levels. Forty percent of the runners said they had recently increased the frequency of their runs, bringing with it a more positive outlook on life.

Of course, you don't need to buy a new sneaker to enjoy these benefits. Exercise's positive effects on mental health are well-documented — and tossing on a ratty pair of kicks for a run isn't going to lessen the effect.

Two weeks from launch — The UltraBoost 21 is slated to release before you wake up on January 28 — 3 a.m. ET to be specific. For $180, you'll be able to find it at Adidas' webstore, physical locations, and a wide range of stockists.

Running performance continues to drive the Ultra Boost series, but for the first time since the OG, it brings with it an appeal that should pique the interest of less active sneakerheads as well.