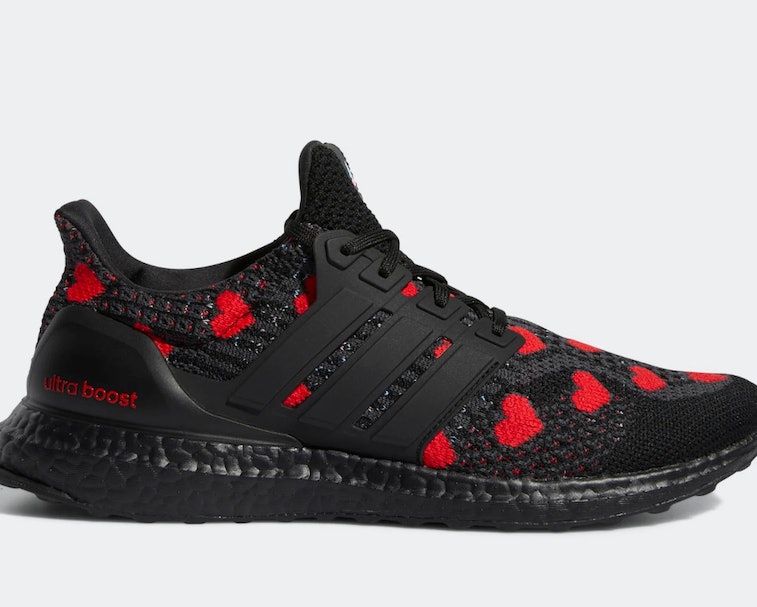 Adidas wants you to be its Valentine this year. But instead of a card, it’s asking with its latest Ultraboost 5.0. The UB is a shoe that’s already well-loved because of its performance and functionality, but with the V-day makeover, it’s bound to turn heads.

A labor of love — The latest iteration of the sneaker wears its heart on its sleeve, literally. The black Primeknit upper gives way to red hearts that stamp the shoe with an elementary schooler’s flair with a white shade peeking through underneath. “Ultraboost” branding on the heel also adopts the red shade, while the tongue logos appear in pastel pink and blue tones. For a finishing touch, the caging opts for a black coat that matches the shoe’s Boost midsole.

When it comes to V-Day sneakers, Adidas seems to switch between subtle details and a grand display of affection. However, it has an affinity for heart-shaped motifs, which are featured in almost every year’s Valentine’s releases. Whether it’s multi-color caging stamps on the Ultraboost in 2021, a pixelated heart midsole on the Ultraboost in 2020, or a shiny red upper on the 2019 Stan Smith, the brand makes sure the symbol of love is front and center.

Valentine’s Day is one of the easiest holidays to design a sneaker around, which almost makes you wish Adidas would stray into more creative territory. For a shoe as functional as the Ultraboost, though, the hearts will do.

The price on these is a hefty $190, so maybe love does cost a thing. The pair doesn’t have an official release date yet, but a February release on the Adidas site is a fair guess. Nonetheless, a runner’s high is often described as the ultimate pleasure to an active person, but receiving these as a Valentine’s Day gift is a close second.