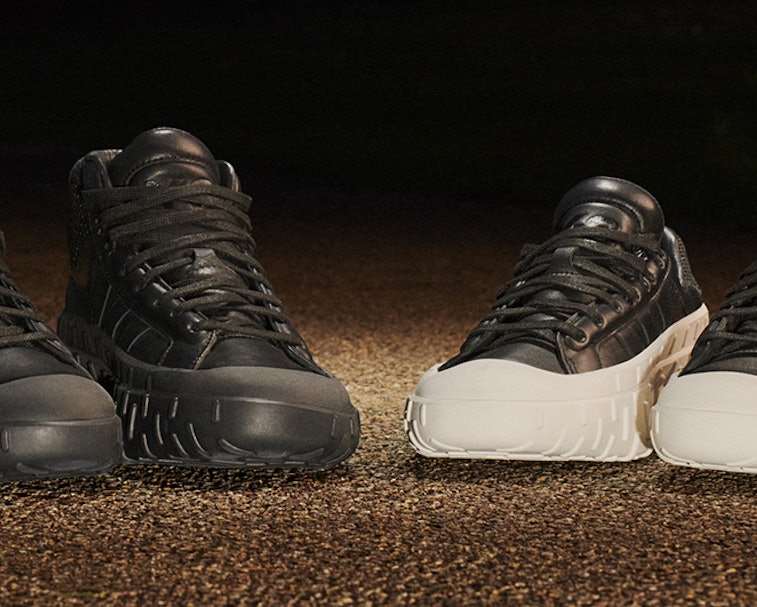 If you want your sneakers to be waterproof, you're probably going to have to dip your toes in the realm of outdoor gear. Thankfully, gorp happens to be quite hot right now — but what if you still don't want to look like you're going to hit a 150-rated trail?

Y-3, Yohji Yamamoto's collaborative label with Adidas, has stepped up with a solution. The new "GR.1P GTX." is an absolute unit, despite the notions Y-3 is putting forward for its Gore-Tex-equipped sneaker. Coming in both high- and low-top versions, the rain-fighting sneaker has a beefy, ribbed sole that extends well onto the upper.

If you want to look more goth than granola while getting the same weather protection, the GR.1P GTX is the shoe for you.

The makeup — A high-quality tumbled leather comprises the majority of the upper, and a robust series of eyelets will ensure a snug fit to help keep water at bay. At the collar, you'll find mesh that should make the shoe easier to get in and out of — and underneath it all is Gore-Tex lining for waterproofing.

Y-3 is keeping the colors monochromatic for both versions of the GR.1P GTX. The high-top comes murdered out with triple-black and a gold Gore-Tex logo on the tag as the lone hint of color. The lower cut shoe, meanwhile, renders its massive rubber sole in white to better contrast with the black leather.

Tonal stripes peek out from underneath both versions — and the low-top especially looks like it's been subsumed by the sole. Y-3's block letter logo also appears on the tongue, only to be swallowed up by the laces for the boot-like high-top. And when it's hit by light, a reflective silver Y-3 logo will reveal itself from beneath the mesh.

Get 'em before the spring showers hit — Adidas hasn't pegged the GR.1P GTX. for release until March 13, but it's already begun to roll out through high-end retailers like Ssense and Nugnes. The high-top will set you back $375, while the low comes in slightly cheaper at $333.