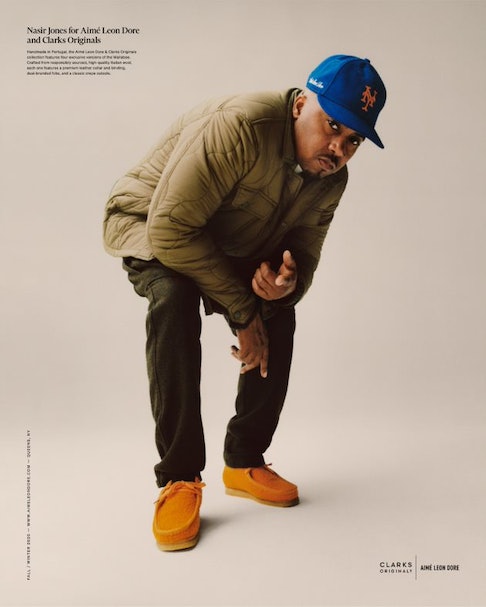 The Clarks Wallabee has been a New York City hip-hop staple ever since the Wu-Tang Clan emerged with their debut album. The Notorious B.I.G. and Nas have also favored the 50-year-old moccasin boot, with Kanye West and Drake showing its continued appeal. So it's only right for Aimé Leon Dore to get the man who rapped "Wallabees be the apparel" to model its first collaboration with the footwear brand.

Nasty Nas is the face of ALD's Wallabee campaign, which trades in the trademark suede upper for Italian wool. The result is a shoe that takes on the best qualities of a shaggy sweater, warm and so cozy it's just begging to be worn. Adding to the quality is handmade construction in Portugal, and the responsibly sourced Casentino wool will only make it more durable.

Pick a color — Aimé Leon Dore's latest collab will come in four colors: green, beige, orange, and black. Branding is limited to a small tag on the opening, as well as gold embossing on the laces' hang tag. This leaves the shoe's focus on the fabric, which should be a delightful addition to your winter rotation.

If you haven't already adopted the Clarks Wallabee, you should consider doing so as an alternative to sneakers. The shoe goes with just about anything and is a tad more stately than any sneaker you'd wear. In the case of ALD, it'll also be more widely available than the brand's own New Balance collabs, which have been flying quickly all year.

The new Clarks Wallabee will first drop through Aimé Leon Dore's website tomorrow, November 21. It'll then hit a much wider range of boutiques — including KITH, Concepts, and Bodega — on November 25. Even if you do have to poke around a few places, it should be a relatively easy pick up. Consider it a refreshing act for both the act of purchasing and in what you'd usually wear on your feet.