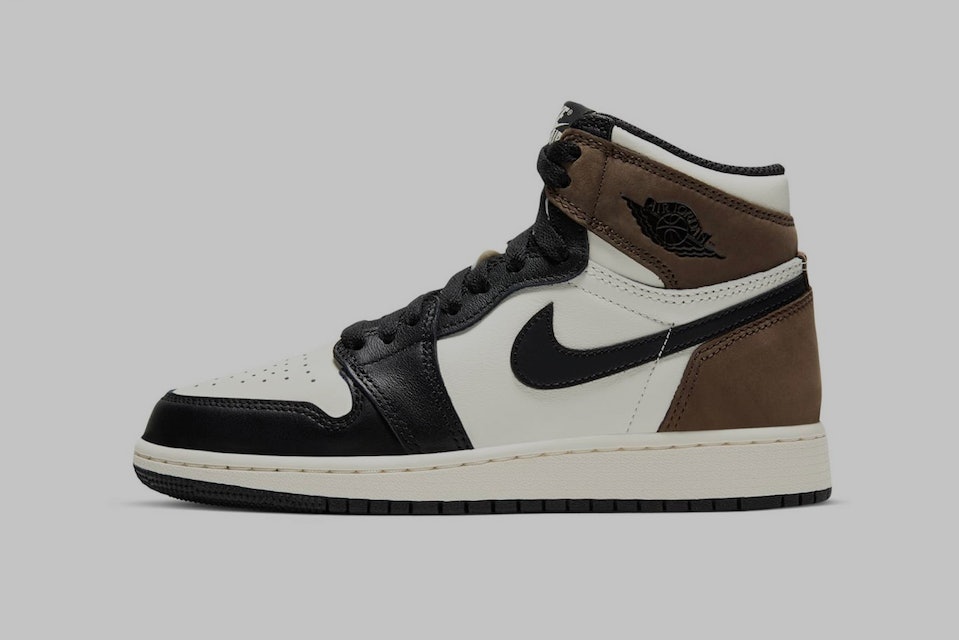 Because of how short sneakerheads' attention spans are, a year and a half is a long time in sneakers. The next supposed "must-have" release is always right around the corner, which makes it easy to get over the shoe that got away or ensures an all-too-brief rush if you were successful in acquiring your target. This perpetual cycle only reinforces how silly of a game we've obsessed ourselves with — but for those less prone to its whims, some good news has arrived for one of 2019's most desired sneakers.

A new Air Jordan 1 "Mocha" is slated to release at the end of the month, and it's strikingly similar to the same sneaker Travis Scott collaborated on last year. Like its more hyped predecessor, the new AJ1 has an upper that combines brown, white, and black. The shade of brown is slightly lighter this time around, and both the mudguard and eyestay have swapped "mocha" for black. Besides that — and a lack of a backwards Swoosh, of course — it's essentially the same shoe, providing a perfectly suitable alternative that require shelling out four figures or turning to a bootleg.

The other similarities — The new Air Jordan 1 also features the same off-white midsole, black outsole and black Air Jordan wing embroidery at the collar. One more deviation comes in the tongue patch, which is now black with a white logo instead of white and red. If you're looking to make it look even more like Travis Scott's pair, all you need to do is pick up a pair of pink laces like the extras that came with it. [Pick up a pair right here for just $6.99.]

It may be a long time coming, but if the Cactus Jack's AJ1 haven't left your mind this is a great opportunity for redemption. Like any Air Jordan 1, demand will be relatively high but not nearly as much as the Scott collabs. You'll have your chance at another shot on Saturday, October 31, when Nike releases the sneaker through the SNKRS app.

And should your like strike out once again, at least the resale price on this joint will still be significantly cheaper than the Travis Scott version. Few of us can drop nearly $2,000 on a sneaker, but a price in the hundreds should make it more accessible on the secondary market.