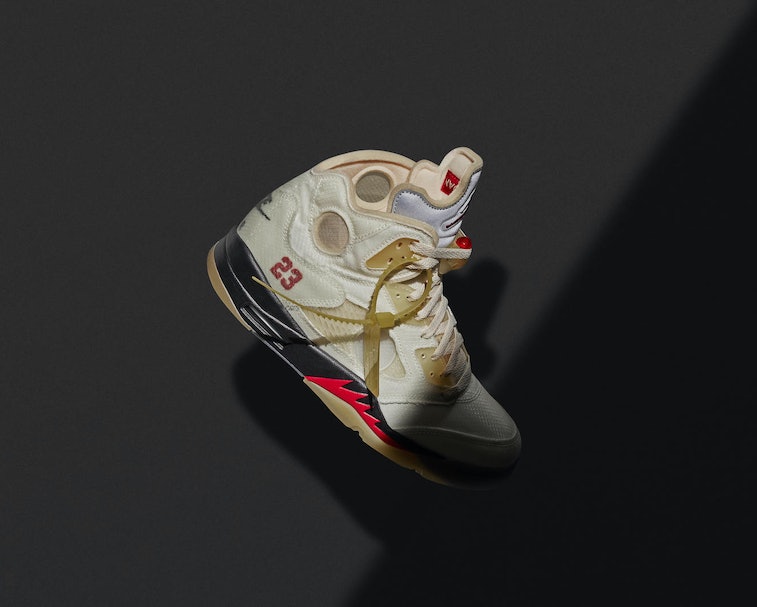 After a cheese grater's worth of leaks surfaced during the course of the year, the "Sail" version of Virgil Abloh's Air Jordan V has been officially confirmed.

Nike will release its latest Off-White collaboration on October 29, with a small clothing capsule to follow in mid-December. The same hoodie released alongside Abloh's first Air Jordan V has been updated to match the new kicks' white, cream, and red color scheme — as have the woven track pants. Completing the capsule is a brand-new white T-shirt featuring a hand-drawn illustration of Michael Jordan and a young child — a likely reference to Abloh growing up watching Jordan play in his hometown.

For most the people looking to buy the new AJ5, whether to wear or price gouge to those who miss out, Nike needs to say little more than "Virgil." The updated sneaker is a guaranteed sell out, and it's just a matter of time before we see another round of people lamenting on social media about how the SNKRS app did them wrong.

Maybe you do want to learn more — Abloh has said on several occasions that the Air Jordan V was the first Jordan he was able to convince his parents to buy, bringing additional sentimentality to a series of collaborations that've served to pay tribute to the legend.

His small tweaks to the shoe, which evoke his design principle of changing an existing item by just 3 percent, include a midsole designed to look already worn and the removal of the padding from the collar. Abloh has also put forth the idea that the shoe isn't complete until its wearer cuts out the rubber holes that feature throughout the upper — a proposition that may just unnerve sneakerheads who view their kicks as precious. This small surgery is known as the final step, and Abloh even posted a tutorial video on how to do it.

A lot of stores are gonna have it — The good news for anyone hoping to secure Abloh's new Air Jordan V is that it'll be available at a ton of other places beside the SNKRS app. All the premier sneaker boutiques in the U.S. will have it, including Bodega, Concepts, Extra Butter, Abloh's own shop Notre, and Undefeated. Head here for the full list of places that'll have it.

While it hasn't been confirmed, the "Sail" Air Jordan V should have the same $225 price tag as its predecessor. Book October 27 as your lucky (or more likely unlucky) day.