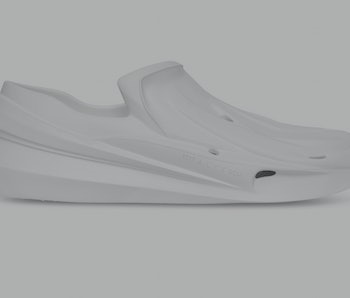 Foam clogs did not need to wait for the rule of three to confirm its acclaim, as Crocs alone had a year to remember in 2020. While the originators rose to unexpected ubiquity last year, the long-awaited Adidas Yeezy Foam Runner also came along as a more hyped and avant-garde alternative. Now, 1017 Alyx 9SM is giving the soft material some hard edges as it brings the footwear up to the pedestal of luxury.

Alyx’s “Mono Slip” is made of a singular piece of EVA foam with carved-out lines that call to mind a Ferrari Testarossa. If Crocs are normcore and Foam Runners are a more wavy take on the silhouette, consider Alyx’s clog as something from a down moment in a sci-fi flick.

The Mono Slip would work great as a house shoe — but who could relegate such a dynamic example of footwear to the home? This mad lad deserves prying eyes, and pre-orders can’t bring them on soon enough.

Mule and sandal adjacent — It wasn’t just Crocs that had a huge moment in 2020. Sandals and mules specifically for men became more in-demand than ever, no doubt boosted by the fact that COVID-19 forced us indoors for the longest consecutive stretches in our lifetimes. Casual, slip-on footwear was perfect for the moment — but dudes have also come around to be less afraid of exposing more of their feet.

With sneakers becoming such a shit show because of resellers and mass appeal, clogs and the like also provide the opportunity to zig when everyone else is zagging with their kicks. Any occasion appropriate for sneakers also works for any form of sandals, and the latter can also be worn near water where you’d never dare subject your sneakers. Because the trend is so versatile, investing a nontrivial amount of coin brings a better return.

Now, we wait — Alyx has put up black and white versions of its new Mono Slip for pre-order, and shipping is slated to begin in Mid-April. At $180, you can’t exactly call the new clog cheap — but it is a more approachable entry point for the luxury brand from Matthew Williams.

Expect to see Alyx’s Mono Slip on fashionable feet this summer, as well as beyond with the brand already teasing mirror silver and black gloss variants to come in its FW21 season.