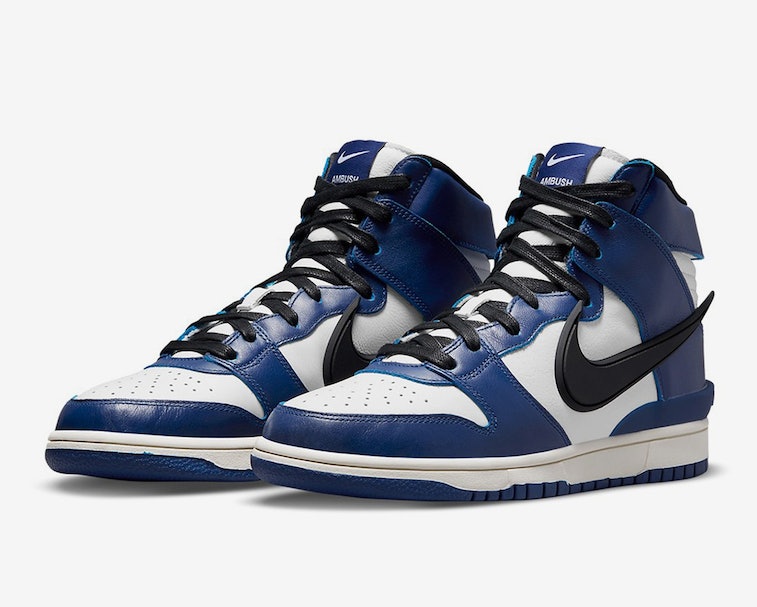 Sneaker newbies often have a difficult time telling apart the Air Jordan 1 and Nike Dunk, but Ambush’s collaborations on the latter are doing them no favors. Founder Yoon Ambush teased a “Chicago” makeup for her Dunk that channels one of the most beloved Jordans and won’t release to the public, and now she’s got another AJ1-inspired Dunk that actually will drop.

Ambush’s “Royal Blue” Dunk High, which first surfaced last month, has finally been confirmed for a release. It’ll be the third motocross-inspired sneaker released by the Tokyo-based brand in partnership with Nike, following all-pink and black-and-white versions. And given that the “Chicago” version will never come, we’re affirming that this other Jordan riff is the best sneaker yet to come from Ambush’s collaborations. A technicality, sure — but make no mistake, this is one hot pair of kicks.

A Dunk that moves — Yoon Ambush wanted to make a sneaker that looks like it’s in motion, and her solution was to have the Swoosh fly off the sneaker-like tailpipes on a motorcycle. While the flourish is pulled from motocross, it also has serious notes of Atomic Age design with its additional protruding elements on the heel.

The Dunk has been an omnipresent presence in sneakers over the last two years, but the way Ambush’s pops just hits different. And by channeling the Air Jordan 1 “Game Royal,” the sneaker pays homage to sneaker history while also providing a (possible) alternative if you don’t have yourself a pair of the original.

Start your engines — Ambush’s latest Dunk won’t drop in the U.S. until June 15, but the rest of the world will get it much sooner come Tuesday, May 18. End. Clothing has already opened its raffle for the sneaker, and you’ll also be able to get it through Nike’s SNKRS app, Ambush’s website, and other select retailers for $189.

If you strike out through all the retail outlets and have to turn to the secondary market, make sure you heed Yoon’s warning — the real thing comes with a blue label on the tongue.