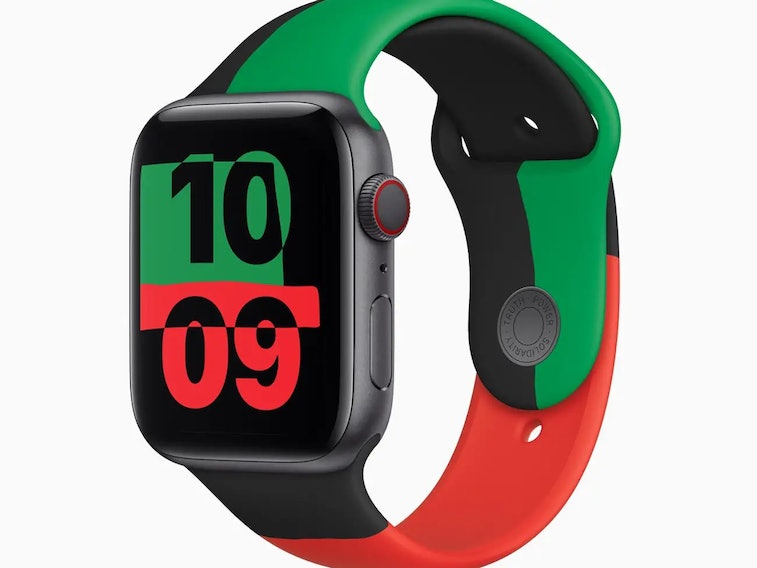 In celebration of Black History Month, Apple is releasing a limited edition Black Unity Collection for its Apple Watch. Made to honor Black history and the fight for racial equality, the collection features a unique watch band and new watchface, with some proceeds donated to civil rights organizations. A limited edition Apple Watch will also drop with the capsule.

The collection drops a month after Apple announced it would work with historically Black colleges and universities and boost the education of typically underserved communities. Big Tech has long neglected and excluded the Black community, and Apple’s concrete change is only part of the company’s $100 million Racial Equity and Justice Initiative, which it announced last summer in the wake of George Floyd’s murder. Apple is certainly taking steps in the right direction, but other company decisions — like the one to remove negative reviews from stock trading app Robinhood — are keeping consumers wary.

In keeping with that theme, the watch comes with a black, green, and red striped band and face, meant to reflect the Pan-African flag. "Red for the blood that unites people of the African Diaspora and was shed for their liberation, black for the people whose existence is affirmed by the flag, and green for the vibrant natural wealth of Africa, the Motherland," Apple explained.

The watch’s face matches the sport band in the same colors, and changes as the Apple Watch moves. Both the dynamic face and colorful band were designed by "members of the Black creative community and allies throughout Apple" as part of the ongoing fight for racial justice, Apple said. The designers have left plenty of hidden details on the watch especially, with “Black Unity” etched onto its back crystal and the words "Truth. Power. Solidarity," laser engraved on the fastening pin of the sport band.

There’s more than meets the watch face — Alongside the launch of the Black Unity collection, Apple announced it would support global organizations to help advance its mission in promoting and achieving equality around the world. The company committed to supporting six organizations that promote civil rights, including the Black Lives Matter Support Fund via the Tides Foundation; European Network Against Racism; International Institute on Race, Equality and Human Rights; Leadership Conference Education Fund; NAACP Legal Defense and Education Fund, Inc.; and Souls Grown Deep. Apple has yet to disclose how much it would be donating or supporting these organizations.

The company also announced a number of other initiatives for Black History Month this year. Its App Store will highlight Black-owned businesses and developers, while Apple Music will get “curated playlists, essays, original videos” and other content highlighting Black artists. Working together with EatOkra, Apple Maps now highlights Black-owned restaurants, giving curated recommendations.

Apple also plans to curate stories focused on Black families and experiences in the Apple TV and Apple News apps, while highlighting Black authors in Apple Books and Apple Podcasts. Those with Apple Watches can also participate in a February Unity Activity Challenge by closing the Move ring seven days in a row to earn a limited edition award.

Cop the commemoration — Apple’s Black Unity Collection drops February 1 on Apple’s website and at select Target stores. While the band will remain on sale all year, the detail-packed watch will only be available in February — so cop now. The limited edition Black Unity Apple Watch runs for $399, but you can update your existing watch with just the band, which can be bought separately for $49.

Anyone who already owns an Apple Watch can download the limited edition watchface and with a number of app adjustments, the company has made the celebration accessible to all Apple product owners. We just wonder when those devices will become more accessible themselves.