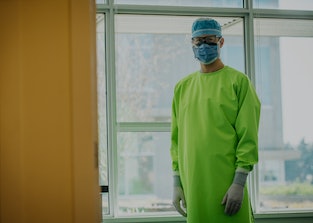 The high-vis variant would be dope for everyday fits, too.

Arc'teryx, purveyors of some of the world's finest outdoor apparel, is joining in on fashion's call to action during the coronavirus epidemic. The Canadian clothing company has announced it'll produce 90,000 reusable medical gowns for those working on the frontlines of the crisis.

30,000 Of those will be made directly by Arc'teryx, while the other 60,000 will come from the brand's partners Mustang Survival and Boardroom Clothing. In an effort to allow other companies to produce more gowns, the pattern has been made open-source.

The gowns also happen to look cool as hell — As New Balance has shown, personal protection equipment (PPE) doesn't have to be boring. Arc'teryx has shown its gown in three fashionable colors: neon and a slightly darker hue of green, as well as a more muted shade of grey. If these gowns weren't, you know, in dire need of falling into the right hands, I'd love the chance to get a fit off in.

A 10-day process — Arc'teryx says it was able to come up with a prototype in 10 days after working with local health authorities and partners in manufacturing and design. From there, the company got to work on producing an initial run of 500 units to help address the shortage of gowns in the British Columbia region where Arc'teryx is based. Now it's in the process of hitting 30,000 units to be distributed by health authorities as they see fit.

Everybody's pitching in — It seems like every day we're covering a new apparel brand chipping in to help with the worldwide pandemic, which is awesome. Nike, Adidas, and Under Armour have all made face shields in addition to other initiatives. LVMH counts hand sanitizer among its COVID-19-related output, and the list of companies making face masks is growing and growing. Hell, even Kylie Jenner and Rihanna have stepped up to help out.

The only downside to it all is how stark of a contrast it presents to the response from the Trump administration. Privatization, despite what anyone who jerks off to Ayn Rand might tell you, shouldn't be the only solution. We need a government equipped to protect us, and what we have instead is exactly what's been predicted since the 2016 election cycle: utter, gross, self-aggrandizing incompetence. It's enough to make you curl up into a ball of dread if the effects of social distancing doesn't have you there already.