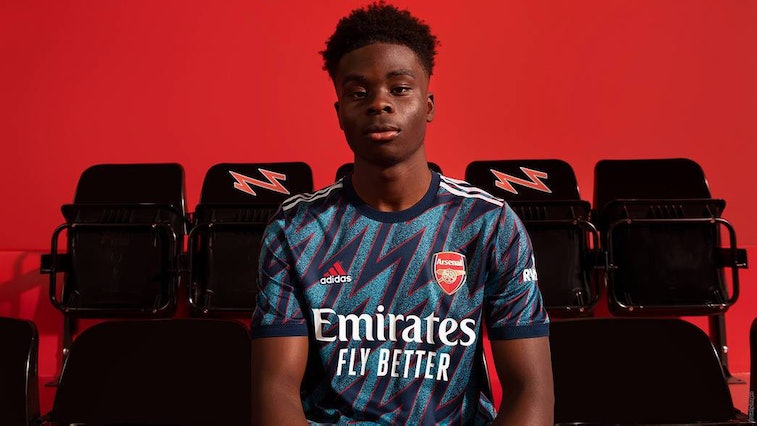 Arsenal may be the Premier League’s favorite team to make fun of, but it’ll now have one of the best jerseys on the pitch this season. The English soccer club unveiled its third kit for the 21/22 season, and it takes inspiration from two of Arsenal’s best from the ‘90s.

Not only were the ‘90s a more successful period for Arsenal, but it was also when soccer kits were at their absolute best. The retro-inspired jersey takes inspiration from two different shits the club wore during the decade, one from Adidas and another from Nike. Light and dark blue stripes take their colors from the club’s “Blue Lightning” shirt, while the zig-zag shape is more in line with the “Bruised Banana” shirt most beloved from the era.

Bouts of ‘90s nostalgia is nothing new in either fashion or futbol, and supporters are constantly urging their club to bring back their most iconic kits. Here, Arsenal and Adidas give the people exactly what they want.

Kit up now — What sets Arsenal’s current day shirt apart from the past are thin red stripes more in line with the club’s official colors and a static-y texture replacing the gradient originally used on the banana shirts. Technology has also enabled today’s uniforms to be more sustainable — these are made from a Primegreen material that uses no virgin polyester.

As a small treat for the wearer, the “Arsenal for Everyone” logo celebrating the diversity within the club and its supporters is printed inside the shirt’s collar. Arsenal will wear its third kit for its league opener Friday against Brentford, and fans can pick up the shirt beginning today through either the club or Adidas’ webstores. Prices start at $90 for adult replica shirts and go up if you want the authentic shirt or to add names and numbers.

More like this
Andrea Carrillo
5.23.2022 5:13 PM
Style
Adidas and Balenciaga’s collab will give you a run for your money
Maya Ernest
17 hours ago
Style
How to dress like emo princess Kourtney Kardashian for under $100
Andrea Carrillo
5.25.2022 3:03 PM
Style
Yeezy Gap Engineered by Balenciaga's second collection will drop this Friday