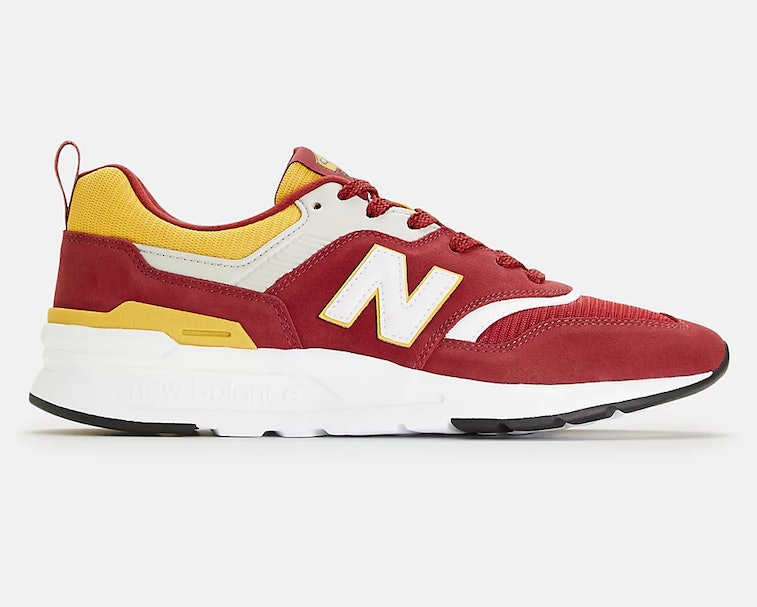 AS Roma has a new manager, a new kit supplier, and now a new sneaker.

New Balance has unveiled a 997H variant for the Italian soccer club after taking over from Nike as Roma’s official outfitter. The shoe takes on the club’s iconic carmine and gold color scheme with the AS Roma badge sitting proudly on the tongue. But perhaps the best detail of all is tucked away on the sneaker’s insole, where La Luma is printed. The female wolf is one of the club’s lesser-used graphics and a nod to the legend of Rome’s origin, in which she nursed Romulus before he’d go on to establish the city.

The Roma 997H arrives as part of New Balance’s “Only Roma” campaign, which espouses the lifestyle surrounding the Italian club. And at just $95 a pair, the Roma celebration comes on the lower end of New Balance’s price point.

A newer twist on a classic — New Balance first introduced the 997H in 2019 as both an update of the iconic 997 sneaker and as a more affordable alternative. Maintaining the shape of the original, the 997H features modernized GCEVA technology in the sole for a more comfortable and lighter fit.

New Balance also launched a 997H recently for FC Porto, which has had the Boston-based brand as its kit supplier since 2014. Athletic Club Bilbao and Lille OSC are also among New Balance’s roster along with the national teams for Panama and Costa Rica, while Liverpool just decamped for Nike ahead of the 21 / 22 season.

While AS Roma’s kits for the new year are nowhere near as exciting as the Nike home and away shirts it wore last season, fans can at least be excited about receiving more attention from a brand with a less crowded roster. The only sneakers AS Roma got from Nike were one-off customs that never went on sale to the general public.