A creepy NFT of a pregnant Hermès Birkin bag sold for nearly $24,000 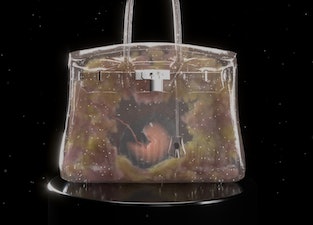 What someone paid to own this piece of fashionable digital art.

Hermès’ Birkin bags usually retail anywhere from $8,500 to $2 million, meaning that buying one symbolizes excessive wealth, social status, and an overall “I’m better than you” attitude. A rendition of the bag selling for $23,500 isn’t typically news — but this version is neither tangible nor backed by Hermès. Also, it’s 40 weeks pregnant.

Created by artists Mason Rothschild and Eric Ramirez, the iconic bag was made into an NFT titled Baby Birkin. With a design exclusive to the virtual bag, the duo said the NFT version is rarer than any physical handbag. But the design, a literal take on the bag’s title, makes its costly sale that much more surprising.

Exclusivity beats rationality — The virtual bag is transparent, featuring a 3D animation of it 40 weeks pregnant with a child. The baby even moves around the bag as it “grows” over time. Apparently, the fetus is supposed to represent an ironic interpretation of the purse known for its exclusivity, but how is unclear. To further add confusion to the theme, the pregnant bag NFT is accompanied by a “space-themed” sound.

Why anyone would want this bag is also baffling. Unlike the traditional Hermès Birkin, this version can’t be touted in real life, nor is it actually backed by the designer brand. NFTs seem to be the latest cash grab in the fashion world, though — the virtual artworks have been sold for millions, feeding off consumers’ desire to own the most exclusive items available.

Besides an IRL Birkin, nothing is more exclusive than an NFT, and nothing says you’re rich like spending a ridiculous amount of money on something weird, unnecessary, and intangible. The online version of the purse was also available immediately to the winning bidder — letting them buy their way to the Birkin, instead of stalling on an Hermès waiting list for months or even years.

Baby Birkin or bust — A bidder named Aki Hayashi is now the proud owner — or maybe just owner — of the Baby Birkin NFT. According to Basic.Space, the members-only e-commerce platform where the NFT was sold, Hayashi bid on the virtual purse a total of four times. After all, who doesn’t consider a pregnant Birkin bag a valuable collectible?

Overall, 32 bids were placed, with Hayashi winning with a bid of $23,500 — making the NFT just as valuable, if not more so, than a physical Birkin bag. If that isn’t enough evidence to tax the rich, I don’t know what is.