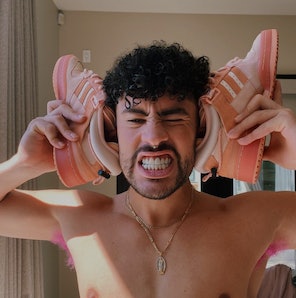 In case you missed it, Bad Bunny is ruling the world right now. The Puerto Rican artist, who made headlines after performing at the Grammys, has dropped three full albums since 2020. He’s taken over sports with his WWE 24/7 Championship, and has entered the fashion world too, debuting a Forum Low sneaker with Adidas. Truly, Bad Bunny is unstoppable — which is why he’s just debuted a second collaborative Forum shoe on his Instagram.

Colored appropriately for Easter, the latest Forum Low comes in a bubblegum pink shade. Like the “First Café” pair that came before it, the sneakers see a mix of suede and synthetic overlays. The clasp of the shoe — added by Benito to the classic silhouette — adds pops of black, while the tongue boasts an “Ojo” (eye) graphic we’ve come to associate with the artist.

Think pink — Bad Bunny debuted the sneakers on his Instagram, holding them up to his head to show off matching pink underarm hair. His caption reads, “las café se acabaron pero quedan estas,” which roughly translates to “the brown ones are done but we still have these.”

Benito then gave us some close-up shots of the shoe, showing off the sneaker’s translucent pink midsole, salmon-colored Three Stripes, and laces. Like his first collaboration, the undone buckle of this pastel shoe reads “Yo Visto Así,” or “I dress like this.” Per additional photos provided by a reputable leak account, the Forum Low also comes with extra tongues and pastel yellow and blue laces. If you leave the footwear all pink, though, you’ll have a Nesquik-esque shoe to complement the artist’s previous Café drop.

Hopefully fans will be able to cop a pair this time around. Bad Bunny’s first Forum was subjected to a lottery-based draw on Adidas’ Confirmed app, and this new pair will probably drop the same way. Of course, consumers are willing to go to extreme lengths to get the sneaker — Bunny’s first Adidas drop is selling for up to $1,500 on StockX. Fans are getting crafty now, though. “Let me borrow them?” reads one of the comments.

Not so bad, Bunny — Whether you’re more into the artist’s Café drop or this strawberry-esque drop, you’ve got to admit the man’s got taste. An official Confirmed app release date hasn’t been, well, confirmed by Adidas yet, but it’s possible this pastel Forum Low may launch in time for Easter on April 4. With Bad Bunny appearing at WrestleMania just a few days later on April 10, a drop around then seems likely. Make sure to ask the Easter Bad Bunny to bring you some.