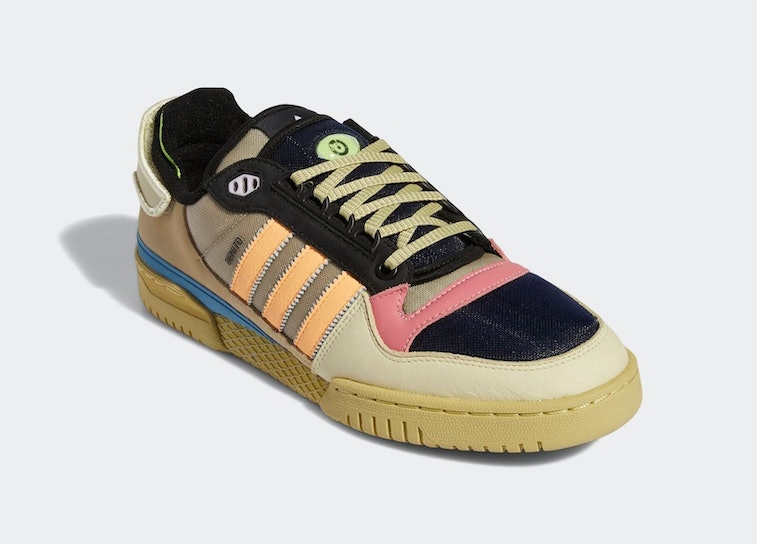 Bad Bunny began building his sneaker empire just under a year ago, and he’s celebrating the landmark with an Adidas model that’s never been done before. Aptly named the Forum PWR, the sneaker combines the upper of Adidas’ Forum with the sole of its Powerphase silhouette, mixing in a varied palette of tan, black, pink, blue, yellow, and orange.

Adidas revealed on Instagram that the colorful collaboration — first teased in January — bears the nickname “Catch and Throw” as a nod to Benito’s childhood, when he often played a game by the same name. Further playing on nostalgia, the pair is inspired by early 2000s skate culture and by the looks of its promo campaign, breakdancing groups. Doubled-up details on the tongue and heel patch help the Forum PWR achieve the same chunky look as shoes from the Y2K era, most notably DC Shoes.

Layered up — Suede, neoprene, and plastic all make up the sneaker’s upper, which comes primarily outfitted in tan and black hues. Elsewhere, fluorescent orange dresses the shoe’s Three Stripes, a muted pink accents the upper toe box, and blue details the mudguard. A light brown Adidas’ Powerphase sole, which is significantly slimmer than the Forum’s, matches a second tongue on the sneaker featuring Adidas’ Trefoil logo.

To truly make the Forum PWR his own, Bad Bunny has added personal details to the shoe, switching out Adidas’ usual branding on the lateral mid-panel for his real name, Benito. The singer’s signature third eye logo, which has appeared on his past Forum collaborations, graces the tongue in a neon yellow shade to match the sneaker’s heel clip. Insoles branded with Adidas and Bad Bunny logos finish off the Forum PWR.

Dropping soon — Such features, and Benito’s own influence, have made his sneakers Adidas’ hottest this year: His initial “First Café” pair is reselling for up to $2,190, and his pink “Easter Egg” iteration is marked up to $800. According to StockX, Benito’s low-top sneakers have become the most coveted non-Yeezy Adidas sneaker in the site’s history following its insane resale prices — hinting that plenty of consumers and resellers alike will be after the artist’s Forum PWR sneakers.

Bad Bunny’s “Catch and Throw” shoe is expected to debut globally on February 9 via the Adidas website and its Confirmed app, coinciding with the launch of Adidas Confirmed in Puerto Rico. Adidas has yet to announce pricing, but it’s worth noting that Benito’s previous sneakers have retailed around $160. That cost includes the Forum PWR pair, a co-branded box, dust bag, and extra black and lavender laces — as well as the flex that you own a pair of Bad Bunny’s kicks.