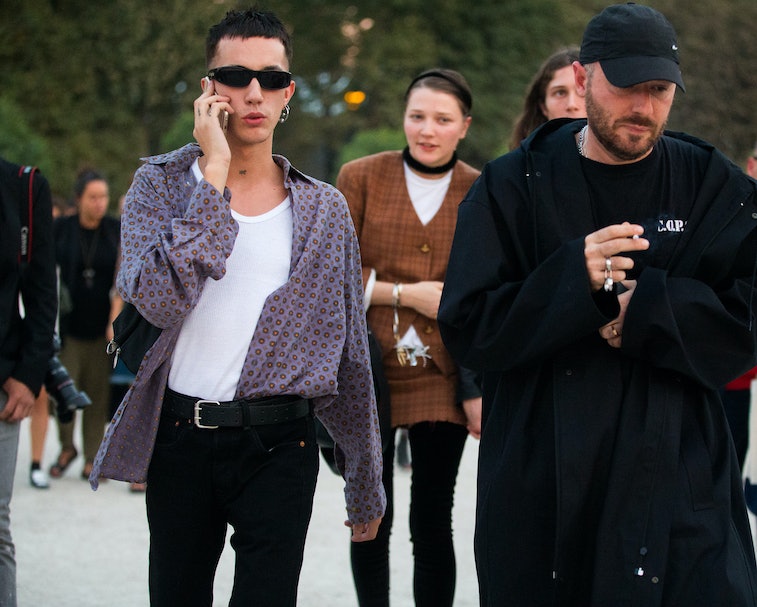 The relationship between fashion and video games has grown throughout 2020, and it's about to get even stronger. Instead of a runway show, Balenciaga will debut its FW21 collection through a video game created just for the occasion.

Afterworld: The Age of Tomorrow will release December 6 and will be set in the year 2031. Billed as an "allegorical adventure," the game will explore the collection's theme of human destiny through "mythological pasts" and "projected futures."

While details are still sparse, the luxury house told Women's Wear Daily the game will see a "hero avatar [advancing] throughout distinct zones, motivated by tasks and interactions." This may be a meaningful description for non-gamers, but those who do partake will say, Yeah, that's a video game. Balenciaga also confirmed it'll be playable through browsers.

COVID-19 has forced fashion to adapt — Demna Gvasalia, Balenciaga's creative director, has been perhaps the most adept at navigating the limitation on fashion weeks imposed by the pandemic. His most recent collection, slated for pre-summer, was unveiled through a short film set to the Corey Hart Song "I Wear My Sunglasses at Night."

Opting for a video game seems even more ambitious, and it continues a trend of high fashion giving more credence to gamers. The lofty theme of human destiny fits neatly into the medium, and Balenciaga describes the virtual world its created by saying it "may appear to be, but it is far from a dystopian view, showing instead the slow return to a healthier balance of nature and industry."

A big year for gaming in fashion — Louis Vuitton announcing its partnership with League of Legends last year was an eye-opening moment for crossover culture, and 2020 has only seen it expand. In the luxury space, Gucci made a $1,600 diving watch targeted at eSports players and loaded its mobile app with playable games.

Streetwear has also been active, with Travis Scott first releasing apparel unofficially inspired by PlayStation before dropping an official collaboration to coincide with the PS5 release. Somewhere in between, Acronym released a real-life jacket from Death Stranding after the game's designers used the brand as a reference point for the characters' attire. And in the adjacent space of sneakers, Nike and Adidas have both gone deeper in their relationships with teams and streamers.

The biggest moment of all, and the most surprising, has come with the release of Animal Crossing: New Horizons. Launching in the early stages of lockdown orders, it became an unlikely space for sartorial expression as players painfully recreated real-world garments in the game. 100 Thieves became the first brand to put its apparel in the game officially, and Nike followed suit with its yearly Pride collection.

For all the stereotypes that existed for gamers in the past, a wide range of brands now sees them as style-savvy consumers that can't be ignored.