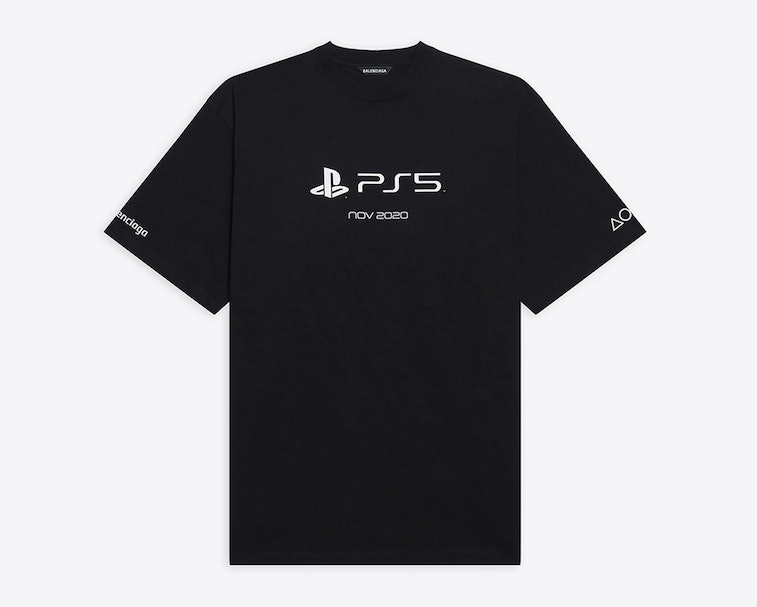 After launching Afterworld: The Age of Tomorrow, a fashion "video game" standing in place of a runway show, Balenciaga teamed up with Sony to create merch centered around the PlayStation 5 console. Now, months after the PS5 dropped in November, the collaboration is finally available for purchase — through the branded apparel will cost you more than the gaming console itself.

With prices starting at $675, the PlayStation-themed clothing is nearly $200 more than the actual PS5, which retails for $499 at most. And considering the cost per wear, you’re getting more of a bargain with the gaming console than with its designer merch, unless you plan on wearing the branded goods 24/7.

Balenciaga’s game is over — This themed collection, along with its price tag, proves anything can be fashion with the addition of a designer title. Unlike its inventive video game, Balenciaga hasn’t added any new concepts to its PS5 capsule, instead opting for simple graphics of the face buttons on the console's controller, co-branding, and “NOV 2020” text. Honestly, the design could be recreated at home for a tenth of its price.

But if you’ve got money to burn — or similarly, chose to buy your PlayStation 5 off a reselling site for thousands of dollars — consider this capsule your gaming uniform. An $875 black hoodie, adorned with PS5 motifs and a huge Balenciaga logo, is a comfy option for sitting on the couch for hours. Alternatively, $675 co-branded black and red tees make playing video games all that more classy — who doesn’t like to buy designer goods solely to stare at the TV? Granted, if you spend that much money on merch, you should wear it out of the house, too.

More PS5 collaborations than PS5s — Most PlayStation 5 fans won’t be able to afford Balenciaga’s themed goods, and unfortunately, most console merch thus far has been just as ironic — or idiotic — as Balenciaga’s collection. Travis Scott’s hyped “PlayStation” Dunk Low sneakers were limited to five pairs, one of which is now selling for over $42,000, and PlayStation’s own capsule celebrating the console was deemed “just not it.”

There’s hope for PS5 collaborations, though: Nike and Sony plan to release a “PlayStation 5” PG5 sneaker by the end of this month. Matching the sleekness of the PlayStation 5, the shoes encompass every part of the console — and at $120, they don’t cost more than one, either.