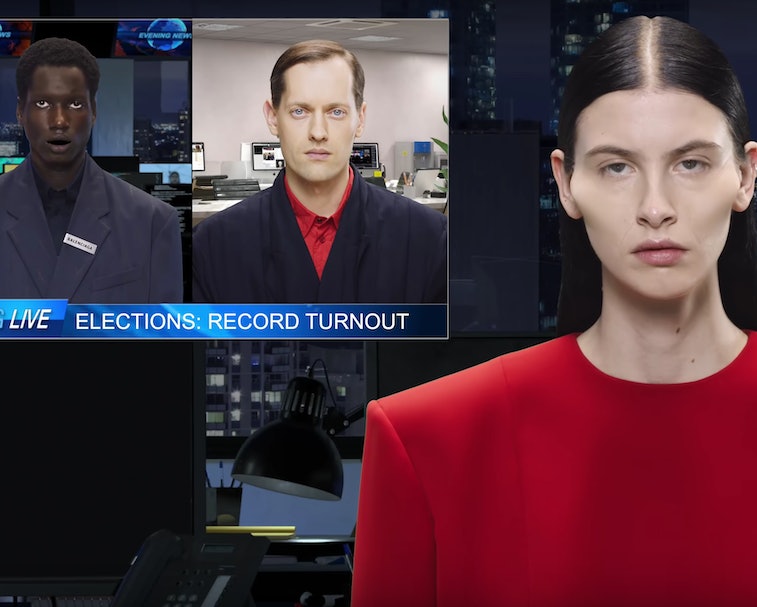 I didn't believe it was possible, but Balenciaga may have created something even more absurd than its clothes. Today, the Demna Gvasalia-led house released its Spring-Summer 2020 campaign video, a four-minute surrealist newscast that's being livestreamed on Twitter on a loop.

Finally, some good news — Most of the stories are positive, save for a planet realignment and mysterious waterfall that are, I guess, neutral(?). In this utopia, traffic jams are gone, pedestrians are "back," and young people are driving record turnout for the election.

Despite this being a reality preferable to our own, the clip takes on an eerie tone with superimposed mouths that make no sound and a haunting soundtrack by Wolf Eyes. The obvious comparison is David Lynch, but director Will Benedict applies his own absurdist flair. Oh, and sunglasses are required — a positive development in the chic department.

Cloth talk — The inhabitants of this bizarre world are all clad in the exaggerated proportions of the new collection, the signature of Gvasalia's Balenciaga. This time around they're applied to "power dressing and fashion uniforms," which were presented at the "Balenciaga parliament or assembly" for its runway show. Suits and dresses are cropped overly boxy, bolstering their authority. If the news in this reality is better, why shouldn't the costumes for its power players be too?

Gvasalia is currently fashion's foremost expert on relevance and has consistently delivered clothing and associated campaigns that people can't stop talking about. He's mastered social media-ready looks, and now he may just invade our dreams and nightmares, too.