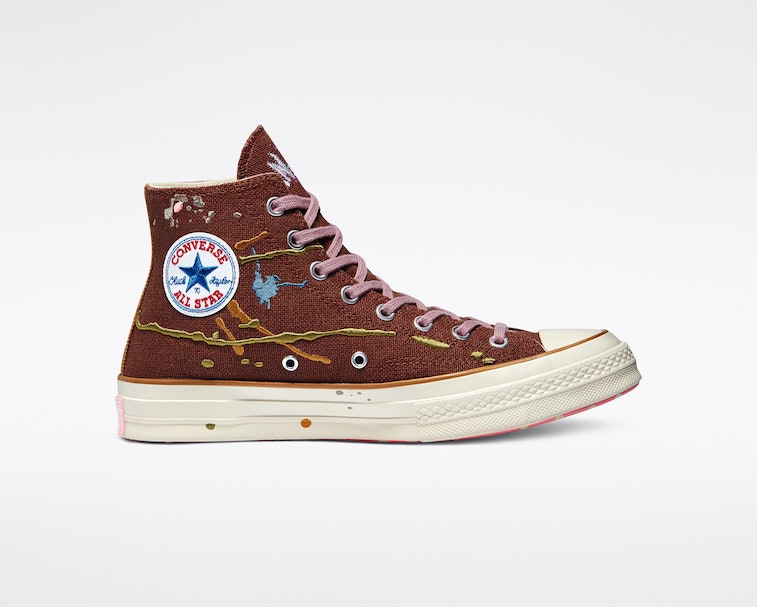 Bandulu is a Brooklyn-based embroiderer who puts the literal drip on clothing. Pat Paltier established his brand, which is named for bootlegs, by hand-stitching vintage apparel to look like they've been dripped all over with paint.

He's expanded his work to include tranquil nature scenes on old Nike ACG apparel, among other motifs, but the paint splatter remains his signature aesthetic — and a covetable one at that. His art-based approach has been stocked at Opening Ceremony (R.I.P.) and gained him clients in Drake, Serena Williams, and 2 Chainz. Now, he's returning to work with his very first collaborator in Converse.

Bandulu is taking on the Chuck 70 and Pro Leather, as well as a small range of apparel, for a Converse capsule serving as an ode to both basketball and art. The kicks come in warm tones with Jackson Pollack-like splatter stitched in an array of colors. With a basis of either cappuccino brown or a burgundy red, the goods are a lifestyle callback to the '70s, when Dr. J dunked all over the NBA while rocking the Pro Leather.

The machines have done it — Paltier typically does all of his work by hand, but to take it to scale Converse utilized the best machines at its disposal to recreate his look as close as possible. Pricing details for the Bandulu capsule have yet to be announced, but they should come in significantly cheaper than its standalone pieces, which typically require hours of labor and start at $150 for T-shirts.

In addition to the lifestyle kicks that were worn on the court many decades ago, Bandulu will also release double-mesh basketball shorts, a two-tone hoodie, T-shirt, and a bag structured to slip perfectly over a regulation-size basketball.

I'm not sure anyone really needs a bag just to hold their ball, but the global shape and embroidery would make it stand out as an alternative to your usual side bag. The basketball shorts could be a great upgrade to the old pair you lounge around in — and although the tee is mostly screen printed, it does have a choice Converse Star Chevron stitched onto the sleeve.

Nerd out before you shell out — Ahead of the release, which kicks off February 6 through Bandulu's website before a wider release February 11, Paltier and Converse lead footwear designer Matt Sleep did a Reddit AMA that's worth digging into.

There, you'll learn more about Paltier's practice and how the two brands came together. And once your knowledge is beefed up, you'll have several chances to cop on Converse's site and at other global retailers. Based on Converse's massive announcement of collaborators, it'll be just the beginning of a huge year for the house of Chucks.