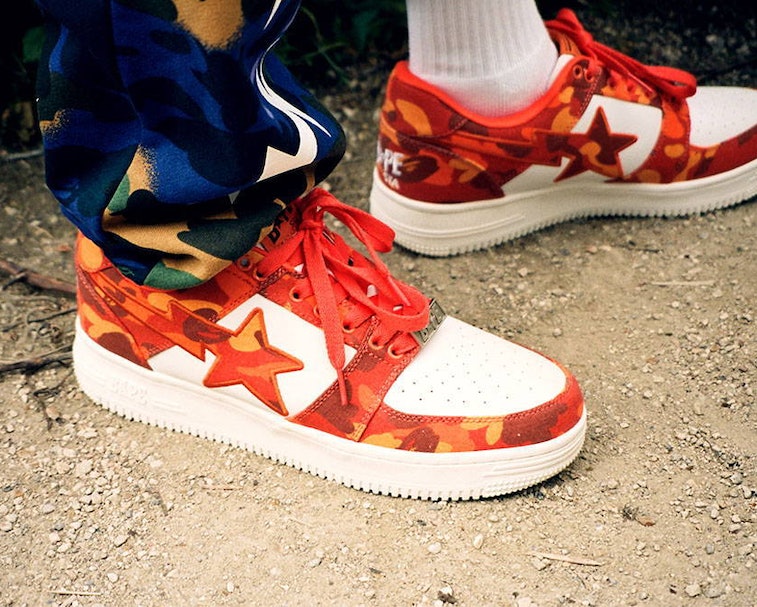 Between New Balance sneakers, racist NFTs, and Gillette razors, Bape’s recent output has had its up and downs. The seminal Japanese streetwear brand has now cooked up a collaboration that firmly falls in the former category, as the iconic Bape Sta silhouette gets a remix from Heron Preston.

A shoe-in for classic Bape — A creative multi-hyphenate, Preston runs his namesake brand and is also well-known for his work with Virgil Abloh and Kanye West. His partnership with Bape is highlighted by the Bape Sta, just about the only Nike Air Force 1 imitation that hasn’t drawn a lawsuit.

The sneaker still follows its traditional design with the usual ABC camouflage printing on the upper and lateral star logo in place of a Swoosh. Preston reached for a shade of bright orange for the camo — one of many for the collab’s new, vibrant color scheme — and placed it atop color-blocked leather overlays.

Smooth white leather tops the toebox and midfoot paneling as well as the soles. For more branding, Bape adds its logo to the rear midsole, brass dubraes, and embroidery on the heel. The only mention of the sneaker’s collaborator can be found on the tongue tags, with the left printed with the usual “Bape Sta” and the right featuring Heron Preston’s signature product label.

Other pieces in the collab reflect back on the NIGO era of Bape with a work jacket and pants, a full-zip Shark Hoodie and sweatpants, and a t-shirt. Bape fans will recognize elements of each from the brand’s archives, like the all-over camo, star prints, and the shark-head, full-zip hoodie. The sweatpants, work jacket, and pants follow a similar design, while the t-shirt sports the familiar giant Ape head. A trucker hat rounds out the accessories, dressed in the same purple, blue, and orange camo.

Give the people want they want — Preston took to Instagram back in April to open up a discussion about whether a brand can survive without a collab. He took notice of “cash-grab corporate collabs” and the “boring nonsense” that seems to oversaturate the streetwear world, asking, “Have we hit a tipping point with pointless collabs?”

The answer, obviously, is subjective. From the looks of the upcoming Bape partnership, Preston aimed to take a step away from a lackluster merging of two logos and created pieces that pay tribute to the brand’s roots and his personal admiration of it. For what it’s worth, Preston said he’s a fan of MSCHF’s “Wavy Baby” sneaker, a rip-off of the Vans Old Skool that’s led to an ongoing lawsuit, proving his own point that brands shouldn’t be “afraid to take a risk.”

Those that can’t resist a well-done Bape collab will be able to shop the Heron Preston Bape Sta sneakers and apparel when they go on sale on May 7 exclusively through the websites for Farfetch, Bapes, and Heron Preston. Prices run from about $312 for the hoodie to about $211 for the sneakers, which means if you want a collab with a little more thought behind it, it’ll cost you a little extra.