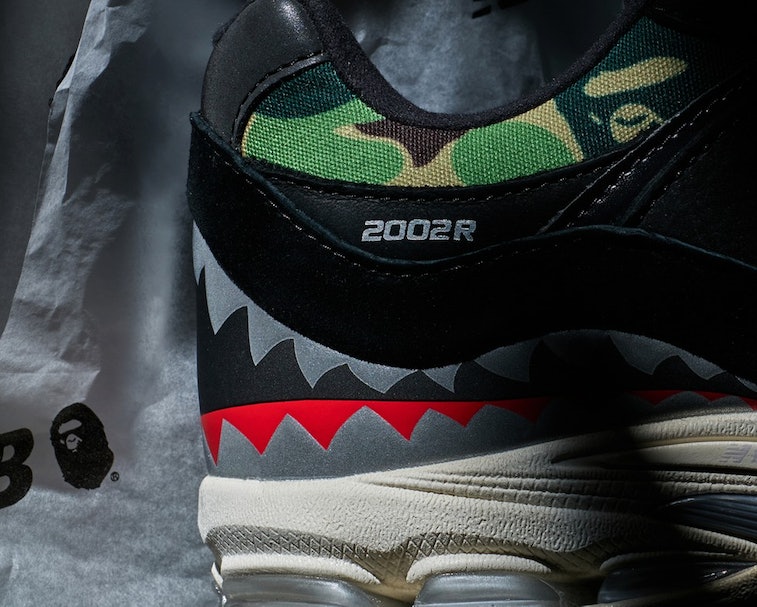 We’ve seen BAPE’s signature camo design on New Balance sneakers before, but the pair in question were always customs. But, for the first time ever, it looks as if BAPE is officially about to collaborate with New Balance to create new iterations of its popular 2002R silhouette. And by the looks of the sample pictures, we’ll be seeing the streetwear brand’s iconic camo, shark tooth graphic, and exclusive packaging.

This partnership is monumental for New Balance, which has already collaborated with Casablanca and designer Salehe Bembury in 2021. The brand, once a sneaker underdog, has recently been redeemed by retro trends, hot collaborations, and new silhouettes. New Balance is open to experimentation like never before, allowing it to move on from its stagnant, classic-focused marketing. The brand’s new collaborative sneaker collection with BAPE only pushes it closer to big names like Nike and Adidas — only one of which has worked with BAPE in the past.

Reshaping BAPE — We’re getting a very small look at one of New Balance’s biggest collaborations yet. Only three teaser images of the BAPE x New Balance 2002R collaborations have been revealed. The first is the most eye-catching, displaying a heel covered in BAPE’s signature 1st Camo, alongside the brand’s familiar shark tooth graphic. A black suede upper and metallic branding can also be seen in the obscure photo.

The second close-up shows a toebox with gray BAPE camo and an STA logo. Dark and light gray suede eyelets and overlays peek out of the picture’s corners. Last but not least, the third photo displays the aforementioned shark heel graphic, boasting its reflective qualities. It also offers a look at the co-branded shoebox, which features an all-over gray camo print and both BAPE and New Balance branding.

While the photos’ up-close-and-personal approach makes it difficult to make out what’s dropping, it appears as if there are two pairs — one with a gray color scheme, and another with a more colorful design. Both sneakers seem to boast suede uppers, reflective details, and plenty of BAPE branding.

April Fool’s — Neither BAPE nor New Balance has announced an official drop date for their 2002R sneakers, but a release shouldn’t be too far away. Official imagery — leaked or not — is a sign the shoes are almost ready to hit the ground running. It’s expected BAPE and New Balance’s 2002R will drop sometime in April, and while a price hasn’t been assigned yet, consumers should expect the shoes to retail for over $200 considering BAPE’s usual and collaborative pricing. Let’s just hope the drop date isn’t April 1.