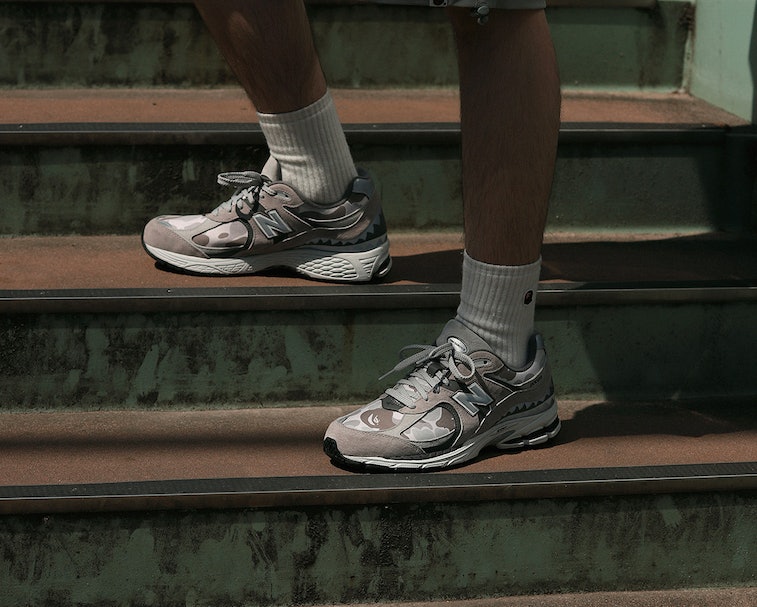 After years of working primarily with Adidas, Bape has begun to diversify by bringing a host of other sneaker brands into the fold. Reebok has become a frequent collaborator with the seminal Japanese streetwear brand this year, and now New Balance will take on the Ape for the very first time.

A duo of camo-clad New Balance 2002Rs has been teased for months and has now been officially confirmed by the two parties. One pair subtly incorporates Bape’s “Cloud Camo” with dad-friendly shades of gray while the other more firmly embodies the print’s origins in a bright array of greens.

Even with New Balance’s recent resurgence driven by streetwear, Bape’s signature pattern is a strange sight on what is normally a quite ordinary sneaker. And as much as we lament over the current state of post-Nigo Bape, we have to admit that this collaboration works well for both parties and is sure to be one of the hits of the summer.

The kicks have teeth — In addition to Cloud Camo, both pairs of 2002Rs make use of another hallmark of Bape’s, the full-zip hoodie. The fangs that normally surround the hoodie’s zipper now appear on the heel of the sneakers to give them the appearance of a fighter jet.

As part of the wider collection, which has been titled “Apes Together Strong,” two full-zip hoodies matching the kicks will be released along with two windbreakers with the same enshrouded hoods. T-shirts and less decorated hoodies also play with the two brands’ motifs, and the highlight of the lot may just be cargo shorts that save the camo for the massive pockets.

China’s up first — So far, the Greater China Region is the only area with a hard release date. The full collection will drop in New Balance and Bape stores there on June 5, with a worldwide release slated to follow sometime after.

Expect a rabid audience as soon as the first drop arrives. Bape is arguably the biggest collaborator yet in New Balance’s recent inroads to hype culture. And as gross as that descriptor can be, these NBs are anything but.